Our local schools have not been exempt from the string of book challenges happening across the nation. While there is a reason that challenge processes exist, these latest efforts feel directed at keeping literature containing certain topics out of the hands of teens who most need safe spaces to explore these issues: sex, sexuality, and identity; racism and prejudice; and personal rights. As we approach summer, a time when teens have a chance to read books purely because they want to, we want to make sure we're introducing them to some titles they probably won't be seeing in their schools, even for recreational reading, going forward.

We absolutely believe literature can change the world, but it does it best by allowing young readers to be exposed to a diversity of ideas and representation so they can learn to make their own informed decisions about their values and their world. Young people should see themselves on pages, but they also need to see people who don't look like them, don't talk like them, don't have the same opportunities they do, and don't have the same beliefs, so they can learn to engage with the whole world around them and start asking questions of their trusted adults.

In light of all of this, we've put together a panel of phenomenal authors who are doing the work of writing important books that are also just great, enjoyable reads. Just in time to compile your summer TBR, come "meet" these authors and hear about their books. 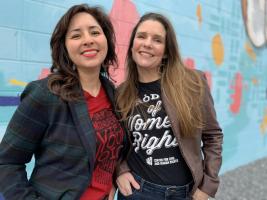 Born and raised in Puerto Rico, Mayra Cuevas is a professional journalist and author of Salty, Bitter, Sweet. Her debut fiction short story was selected by Becky Albertalli as a New Voice in the Foreshadow YA serial anthology in 2019. She is a TV and digital producer for CNN. She lives in the colorful town of Norcross, Georgia, with her husband and their cat, Felicia. She is the wicked stepmom to two amazing young men who provide plenty of inspiration for her stories. Follow her on Twitter at @MayraECuevas and Instagram at @MayraCuevas

Marie Marquardt is a Scholar-in-Residence at Emory University's Candler School of Theology and author of Dream Things True and The Radius of Us. She has published articles and co-authored two nonfiction books about Latin American immigration to the U.S. South. Marie is chair of El Refugio, a nonprofit that serves detained immigrants and their families. She lives in a busy household in Decatur, Georgia, with her spouse, four children, a dog, and a bearded dragon. Follow her on Twitter at @MarieFMarquardt and Instagram at @Marie_Marquardt.

Jen Ferguson is Métis (on her father's side) and Canadian settler (on her mother's side), an activist, a feminist, an auntie, and an accomplice armed with a PhD. She believes writing, teaching and beading are political acts. She is represented by Patricia Nelson at Marsal Lyon Literary Agency.

Her debut young adult novel, The Summer of Bitter and Sweet, is forthcoming from Heartdrum / Harper Collins May 10, 2022. Her first book for adults, Border Markers, a collection of interrelated flash fiction stories, is out now with NeWest Press. Her essay "Off Balance" was selected for the Best Canadian Essays 2020.

She lives on Gabrielino Tongva territory and teaches fiction writing at Loyola Marymount University. You can reach her on twitter at @jennyleeSD or through her contact page.

Juliana Goodman was born and raised in Blue Island, Illinois. She received her B.A. in English Literature from Western Illinois University and her MFA in Fiction Writing from Purdue University. Juliana has received several awards and scholarships for her writing and was a Jack Kent Cooke Graduate Arts Award Finalist. She's had work published in Sigma Tau Delta's Rectangle, Blackberry: a Magazine and Fiyah Literary Magazine. Juliana is a literary arts fellow with the Tulsa Artist Fellowship. In her free time, she enjoys watching horror films, reading the latest young adult novels and hanging out with her pit bull, Artie Partie and her cat, Pickle.

Estelle Laure is the author of ten published and/or forthcoming picture books and young adult novels, including acclaimed novel This Raging Light and Disney's City of Villains trilogy. She holds an MFA in Writing for Children and Young Adults from Vermont College of Fine Arts and a BA in Theatre Arts from New Mexico State University. She lives in Taos, New Mexico (the best place on earth), with her family, and her work has been translated into more than fifteen languages around the world.

Carrie McCrossen is an actor-writer-comedian who loves a good hyphen. She was a longtime performer at the Upright Citizens Brigade Theater in New York and has appeared on TV, (Divorce, Adam Ruins Everything, The Rundown,) on stage, (The Pearl,) and if you are a Comcast subscriber, you may know her as the longtime host of Xfinity On-Demand.

Carrie’s writing has appeared in The New Yorker’s Daily Shouts, the Lifetime network, and on Funny or Die. Her debut YA novel, Margot Mertz Takes It Down, (co-written with Ian McWethy,) is coming out this fall. When not working, Carrie enjoys buying her son handmade wooden toys he has no interest in and forcing him to harmonize with her.

Sonora Reyes is a queer second-generation immigrant who attended a Catholic high school. They write fiction full of queer and Latinx characters in a variety of genres. Sonora is also the creator and host of #QPOCChat, a monthly community-building Twitter chat for queer writers of color. They currently live in Arizona, in a multigenerational family home with a small pack of dogs who run the place.

Does My Body Offend You? (Hardcover)

A timely story of two teenagers who discover the power of friendship, feminism, and standing up for what you believe in, no matter where you come from. A collaboration between two gifted authors writing from alternating perspectives, this compelling novel shines with authenticity, courage, and humor.

Does My Body Offend You? (Kobo eBook)

The Summer of Bitter and Sweet (Hardcover)

In this complex and emotionally resonant novel about a Métis girl living on the Canadian prairies, debut author Jen Ferguson serves up a powerful story about rage, secrets, and all the spectrums that make up a person—and the sweetness that can still live alongside the bitterest truth.

The Summer of Bitter and Sweet (Kobo eBook)

In Juliana Goodman's powerful young adult debut The Black Girls Left Standing, Beau Willet will stop at nothing to clear her sister's name.

"A powerful, poignant story about a girl rewriting her story on her own terms. Jo Beckett's journey of sexual and emotional agency is at once tender, painful, hilarious, and courageous."
—Kathleen Glasgow, New York Times bestselling author of Girl in Pieces

Margot Mertz Takes It Down (Hardcover)

Veronica Mars meets Moxie in this hilarious and biting YA contemporary novel following Margot Mertz, a girl who runs an internet cleanup business and embarks on a quest to take down a revenge-porn site targeting the girls in her school.

A sharply funny and moving debut novel about a queer Mexican American girl navigating Catholic school, while falling in love and learning to celebrate her true self. Perfect for fans of Erika L. Sánchez, Leah Johnson, and Gabby Rivera.