Join us virtually for what is sure to be a fascinating conversation between Aparna Shewakramani, of Netflix's Indian Matchmaking fame and author of She's Unlikeable: And Other Lies That Bring Women Down, and Amrutha Jindal, the Chief Defender Attorney for Houston's Restoring Justice. They're going to talk about the book, but also the roles we play as women, and the roles we're cast in when other people tell our stories.

Register for the Zoom event here. 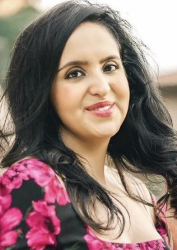 Aparna Shewakramani is a lawyer who holds a JD from Vanderbilt Law and a BA from Rice University. The breakout star of Netflix's hit series Indian Matchmaking, Shewakramani became an overnight ambassador for women demanding to be heard--in their love lives, workplaces, and in every space they occupy. She is the founder and owner of the luxury travel company My Golden Balloon. She lives in New York City.

Amrutha Jindal was born and raised in Houston. She received her Bachelor of Arts, cum laude, in Government and Sociology from Cornell University and her Juris Doctor at Georgetown University Law Center. She has conducted national trainings in a variety of areas related to criminal defense litigation and strategy. Amrutha joined Restoring Justice as the organization's Chief Defender Attorney in March 2020. In this role, Amrutha is responsible for overseeing the organization’s legal programming and advocacy efforts. She also represents Restoring Justice’s clients in their criminal cases. When Amrutha’s not working, you can find her hanging out with friends and family, hiking or doing something active outdoors, or daydreaming about travel.

She's Unlikeable: And Other Lies That Bring Women Down (Hardcover)

When Aparna Shewakramani appeared on Netflix’s hit series, Indian Matchmaking, it soon became clear that Aparna knew what she wanted. But all stories are told through certain lenses—and her story is no exception.