We tend to think of scary reads in fall, but we know there's a ton of horror readers out there looking for some great reads outside of spooky season. Have no fear (okay, maybe be prepared for a little fear), we've got an event for you!

Join Bookseller David for an In Conversation event with Catriona Ward, author of Sundial, and Jennifer Fawcett, debut author of Beneath the Stairs, discussing all things writing, books, and horror.

Register for the Zoom Webinar here.

Jennifer Fawcett grew up in rural Eastern Ontario and spent many years in Canada making theatre before coming to the United States. She holds an MFA from the Iowa Playwrights Workshop. Her work has been published in Third Coast Magazine, Reunion: The Dallas Review, Storybrink, and in the anthology Long Story Short. She teaches writing at Skidmore College and lives in upstate New York with her husband and son. 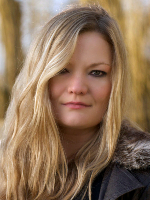 Catriona Ward was born in Washington, DC and grew up in the United States, Kenya, Madagascar, Yemen, and Morocco. She studied English at Oxford and later the Creative Writing Masters at the University of East Anglia. She won the August Derleth Award for Best Horror Novel for her debut, The Girl from Rawblood, and again for Little Eve, making her the first woman to win the prize twice. Little Eve also won the Shirley Jackson Award for Best Novel, and is published by Nightfire.

Beneath the Stairs: A Novel (Hardcover)

“An enthralling debut by a gifted storyteller!” —Wendy Walker, author of Don’t Look for Me

In this spine-tingling, atmospheric debut for fans of Jennifer McMahon, Simone St.

Beneath the Stairs (Kobo eBook)

“DO NOT MISS THIS BOOK. Authentically terrifying.” —Stephen King