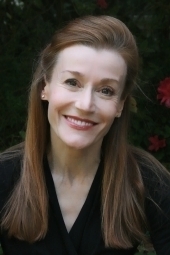 When Robin Wells sold her first romance novel in 1995, her family celebrated at a Chinese restaurant. Robin’s fortune cookie read, “Romance moves you in a new direction.”

And it certainly has! Robin has since written seventeen critically acclaimed novels that have been translated into nineteen languages. She is the author of such favorites as Baby, Oh  Baby!, and Ooh, La La!. Her books have won RWA’s Golden Heart Award, two National Readers’ Choice Awards, the Award of Excellence, the Golden Quill, and the Holt Medallion.

Robin was born in Waco, Texas and holds a B.A. in liberal arts from the University of Oklahoma. Before becoming a full-time writer, Robin worked as an advertising and public relations executive for a major hotel chain.

Robin, her two daughters and her husband lived just outside New Orleans for many years, and recently moved to Houston, Texas.

If you are unable to attend, you may purchase your book ahead of time and we will have your book signed for you.  Please specify if the book is to be picked up or shipped.

Robin Wells weaves a moving epic that stretches from modern-day Louisiana to World War II-era New Orleans and back again in this multigenerational tale of love, loss and redemption.

Hope Stevens thinks Wedding Tree, Louisiana, will be the perfect place to sort out her life and all the mistakes she’s made. Plus, it will give her the chance to help her free-spirited grandmother, Adelaide, sort through her things before moving into assisted living.

Spending the summer in the quaint town, Hope begins to discover that Adelaide has made some mistakes of her own. And as they go through her belongings, her grandmother recalls the wartime romance that left her torn between two men and haunted by a bone-chilling secret. Now she wants Hope’s help in uncovering the truth before it’s too late.

Filled with colorful characters, The Wedding Tree is an emotionally riveting story about passion, shattered dreams, unexpected renewal and forgiveness—not only for others, but for ourselves.