Join four authors of YA with strong heroines in a discussion moderated by Frolic Media's YA expert, Aurora Dominguez.

Physical copies of each title are available for curbside pickup or shipping. You can also order the Kobo ebooks through the links below for automatic download. 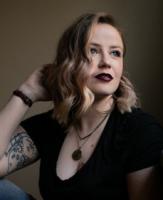 Katharyn Blair is a novelist and screenwriter. She graduated with her MFA in 2015 and is finishing her MA in literature. She's been a social media coordinator for several films at 20th Century Fox, an intern at her city's Parks and Recreation Department, a gymnastics coach, and, most recently, a writing professor at Azusa Pacific University. She lives outside of Los Angeles with her family. The Beckoning Shadow is her debut novel. 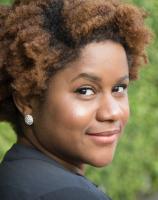 Namina Forna has a MFA in film and TV production from USC School of Cinematic Arts and a BA from Spelman College. She now works as a screenwriter in LA and loves telling stories with fierce female leads. The Gilded Ones is her debut novel. Visit her on twitter at @NaminaForna and on Instagram at @namina.forna.

Alexandra Monir is the Iranian-American author of the internationally bestselling novel The Final Six and five other books for young adults. Alexandra spent her teen years as a pop singer before publishing her debut novel, Timeless, and continues to write and record music. She lives in Los Angeles with her husband, toddler son, and one fluffy Shih Tzu. To learn more about Alexandra, visit her online at alexandramonir.com, and follow her on Twitter, Facebook, and Instagram.

New York Times and USA Today bestselling author Tracy Wolff wrote her first short story--something with a rainbow and a prince--in second grade. By ten, she'd read everything in the young adult and classics sections of her local bookstore. A one-time English professor with more than fifty novels to her name, she now devotes most of her time to writing and dreaming up heroes. She also writes under the name Tracy Deebs and lives in Austin, Texas, with her family. Visit her online at tracywolffbooks.com.

Katharyn Blair crafts a fiercely feminist fantasy with a horrifying curse, swoon-worthy sea captains, and the power of one girl to choose her own fate in this contemporary standalone adventure that's perfect for fans of The Fifth Wave and Seafire, and for anyone who has ever felt unchosen.

The first was when her childhood crush, Dean, fell in love--with her older sister.

The second was when the Crimson, a curse spread through eye contact, turned the majority of humanity into flesh-eating monsters.

Neither end of the world changed Charlotte. She's still in the shadows of her siblings. Her popular older sister, Harlow, now commands forces of survivors. And her talented younger sister, Vanessa, is the Chosen One--who, legend has it, can end the curse.

When their settlement is raided by those seeking the Chosen One, Charlotte makes a reckless decision to save Vanessa: she takes her place as prisoner.

The word spreads across the seven seas--the Chosen One has been found.

But when Dean's life is threatened and a resistance looms on the horizon, the lie keeping Charlotte alive begins to unravel. She'll have to break free, forge new bonds, and choose her own destiny if she has any hope of saving her sisters, her love, and maybe even the world.

Because sometimes the end is just a new beginning.

The Gilded Ones (Hardcover)

The most anticipated fantasy of 2021. In this world, girls are outcasts by blood and warriors by choice. Get ready for battle.

Sixteen-year-old Deka lives in fear and anticipation of the blood ceremony that will determine whether she will become a member of her village. Already different from everyone else because of her unnatural intuition, Deka prays for red blood so she can finally feel like she belongs.

But on the day of the ceremony, her blood runs gold, the color of impurity-and Deka knows she will face a consequence worse than death.

Then a mysterious woman comes to her with a choice: stay in the village and submit to her fate, or leave to fight for the emperor in an army of girls just like her. They are called alaki-near-immortals with rare gifts. And they are the only ones who can stop the empire's greatest threat.

Knowing the dangers that lie ahead yet yearning for acceptance, Deka decides to leave the only life she's ever known. But as she journeys to the capital to train for the biggest battle of her life, she will discover that the great walled city holds many surprises. Nothing and no one are quite what they seem to be-not even Deka herself.

The start of a bold and immersive fantasy series for fans of Children of Blood and Bone and Black Panther.

The Gilded Ones (Kobo eBook)

DC Icons continues with the first-ever YA origin story of superhero Black Canary, from the internationally bestselling author Alexandra Monir. In this thrilling novel, Dinah Lance's voice is her weapon. And in a near-future world where women have no rights, she won't hesitate to use everything she has--including her song--to fight back.

Dinah Lance was eight years old when she overheard the impossible: the sound of a girl singing. It was something she was never meant to hear--not in her lifetime and not in Gotham City, taken over by the vicious, patriarchal Court of Owls. The sinister organization rules Gotham City as a dictatorship and has stripped women of everything--their right to work, to make music, to learn, to be free.

Now seventeen, Dinah can't forget that haunting sound, and she's beginning to discover that her own voice is just as powerful. But singing is forbidden--a one-way route to a certain death sentence. Fighting to balance her father's desire to keep her safe, a blossoming romance with mysterious new student Oliver Queen, and her own need to help other women and girls rise up, Dinah wonders if her song will finally be heard. And will her voice be powerful enough to destroy the Court of Owls once and for all?

I may have reached my breaking point. As if trying to graduate from a school for supernaturals isn't stressful enough, my relationship status has gone from complicated to a straight-up dumpster fire.

Oh, and the Bloodletter has decided to drop a bomb of epic proportions on us all...

Then again, when has anything at Katmere Academy not been intense?

And the hits just keep coming. Jaxon's turned colder than an Alaskan winter. The Circle is splintered over my upcoming coronation. As if things couldn't get worse, now there's an arrest warrant for Hudson's and my supposed crimes?which apparently means a lifetime prison sentence with a deadly unbreakable curse.

Choices will have to be made...and I fear not everyone will survive.

The instant New York Times bestseller!
An Amazon Best YA Book of the Month
Glitter magazine's YA Feminist Must-Reads of 2020

Everything feels off--especially me. I've returned to Katmere Academy, but I'm haunted by fragments of days I have no recollection of living and struggling to understand who, or what, I really am.

Just when I start to feel safe again, Hudson is back with a vengeance. He insists there are secrets I don't know about, threatening to drive a wedge between Jaxon and me forever. But far worse enemies are at our doorstep.

The Circle is caught in a power play and the Vampire Court is trying to drag me out of my world and into theirs. The only thing Hudson and Jaxon agree on is that leaving Katmere would mean my certain death.

And not only am I fighting for my life, but now everyone else's is at stake--unless we can defeat an unspeakable evil. All I know is that saving the people I love is going to require sacrifice.

Maybe more than I'm able to give.

Discover the New York Times bestselling series!
An Amazon Best YA Book of 2020
Glitter magazine's #1 Pick for Best YA of 2020

My whole world changed when I stepped inside the academy. Nothing is right about this place or the other students in it. Here I am, a mere mortal among gods...or monsters. I still can't decide which of these warring factions I belong to, if I belong at all. I only know the one thing that unites them is their hatred of me.

Then there's Jaxon Vega. A vampire with deadly secrets who hasn't felt anything for a hundred years. But there's something about him that calls to me, something broken in him that somehow fits with what's broken in me.

Which could spell death for us all.

Because Jaxon walled himself off for a reason. And now someone wants to wake a sleeping monster, and I'm wondering if I was brought here intentionally--as the bait.