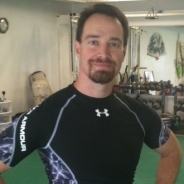 Whit McClendon, is a local treasure as a fantasy author and as a martial arts instructor with a line of related books. We are so thrilled to have him back in store signing all of his books.

If you haven't had the opportunity already, come meet him and pick up signed copies of his two fantasy series or any of his Jade Mountain Martial Arts Workout Series. There's a rumor his new book, the first in a new urban fantasy series, may be available, as well.**

Whit McClendon is a martial arts instructor who happens to write a bit. After working in the petrochemical field as a CAD drafter for many years, Whit finally achieved his life’s dream of becoming a full-time martial arts instructor. He lives with his family and two ridiculous pugs outside of Houston, Tx, and he enjoys reading, writing, training in several martial arts, teaching, running Tough Mudders, and playing lacrosse.

**Not all of the Faerie are sweet little Pixies. There are a few who do the dirty work on the side of the Light. Unknown protectors walk among us, gleefully using fang and claw and magick, leaving a bloody trail of vanquished evildoers in their wake. They are the GrimFaeries. If you are evil enough to try to tip the balance towards the Dark side, you might just get a visit from one. And they won't be leaving a coin under your pillow.

When Kane the Grim is tasked with finding a serial murderer in Houston, he discovers that there is much more at stake. Magick is afoot, and an evil sorcerer is behind the killings. When he rescues a witch from certain death, his new mission becomes clear: stop the bad guy before it’s too late. Teaming up with a witch who's as good with a gun as with her spells, they'll face monsters, magick, and M-16's, as they risk everything to stop the evil in its tracks before all is lost.

If you're a fan of Jim Butcher's Dresden Files, you'll love the first tale of the GrimFaerie Chronicles, an exciting new urban fantasy from Whit McClendon, the author of the Fire of the Jidaan Trilogy!

After the brutal murder of his family, Gart’s voyage continues as he searches for the weapon that was promised him by the Mage, Brunar. Once a peaceful farmer, who only wanted to be left alone, Gart must now become something more. Struggling with the powerful magick that grows within him, Gart follows a dangerous path. Only with the fabled Jidaan of Storms would he have a chance against Mordak’s Champion, the demon-bred Jor Dayne. Guided by the noble Brunar, the other five Guardians make their way to Laro, hurrying to reach the walled city before Mordak’s army. Brunar and the elf-like Weya guide the Duke and his fierce warriors as they face an enormous, bloodthirsty horde of nightmarish creatures. The dead will rise and evil will walk the walls of Laro if Mordak has his way. As the time for battle draws near, Gart fights his own monsters…alone.

The power of the evil sorcerer, Mordak, has grown, and Brunar and the Guardians must somehow fight their way free of his clutches. Across the continent, the reluctant Gart finally accepts his Jidaan and the incredible powers that come with it, but his challenges have only just begun. Will he survive river daemons and savage monsters to aid the Guardians in their final battle? The fate of Talwynn hangs in the balance as brave heroes face overwhelming odds, deadly dark magick, and the wrath of a Daemon-God. At last, the stunning conclusion of the Fire of the Jidaan Trilogy!

(Available in-store at the event)

Reyanna is a woman with a secret. A human raised among the noble and wise Weya, she had passed all the tests and become a Ranger, as adept with bow and dagger as any of the elf-like people who trained alongside her. But she has a frightening power deep within, and it’s growing. When a vision strikes out of nowhere, a powerful prophecy that brings her to her knees, she is thrust headlong into a perilous journey.

The war with the vile sorcerer, Mordak, ended over twenty years ago, and the land is peaceful. The Jidaan-wielding Guardians who survived have gone their separate ways, settling into more quiet lives. The power in the short-handled, long-bladed spears has slumbered, no longer needed. When the same vision overcomes the Guardians, they know the time has come to awaken the Jidaan once more.

Gart, wielder of the Jidaan of Storms, and the most powerful of the Guardians, sets out on a dangerous quest that will either reunite him with his love or destroy the world. Three evil sorcerers have their own plans for Gart, and they will stop at nothing to get what they want. And all the while, Reyanna’s power struggles for release.

Can Reyanna and the Guardians solve the riddle of the prophecy in time? Or will Gart’s obsession bring about the end of all things?

It’s a fast-paced, exciting epic fantasy adventure set in the world of the Fire of the Jidaan trilogy!

(Available in-store at the event)

The tale began in Reyanna’s Prophecy: bound by a shared vision of devastating power, a young girl, aging heroes, a dangerous Mage, and a trio of evil sorcerers embark on dangerous paths. Reyanna’s Fire draws them together in the story’s stunning conclusion!

Reyanna and the Guardians struggle to unravel the Prophecy. At its center is Gart, the most powerful of them all. Determined to perform a ritual that will either reunite him with his long-lost wife, or destroy the world, Gart needs only the Heart of Corria, a huge, mystical diamond, to fulfill his purpose. The price had been high; he’s wounded, the Jidaan of Storms has been stolen, and his faithful dog, Beauty, is near death. Nevertheless, his obsession drives him on.

Reyanna’s fire magick has grown almost beyond her ability to control. When confronted by the evil sorceress, Melidia, Reyanna’s power takes over her mind and body, and she wreaks havoc to make her escape. Horrified, but determined to find answers, she rides a giant spider towards the deadly swamp known as the Poravian Mire in search of her destiny.

Meanwhile, Nessar, Kiran, and Layton trek across the continent to prevent Gart from completing his ritual. They, too, must brave the Mire’s lethal creatures and unknown dangers, but the hazards of the Mire are only the beginning. In her lust for power, Melidia has awakened an ancient and monstrous evil that could kill them all.

Can Reyanna and the Guardians stop Gart’s mission? Or will Melidia’s evil triumph after all?

The finale of this exciting adventure!

Short Workouts for Beginners: Get Healthier and Stronger at Home (Kobo eBook)

Kettlebell Training for Beginners: The Basics: Swings, Snatches, Get Ups, and More (Paperback)