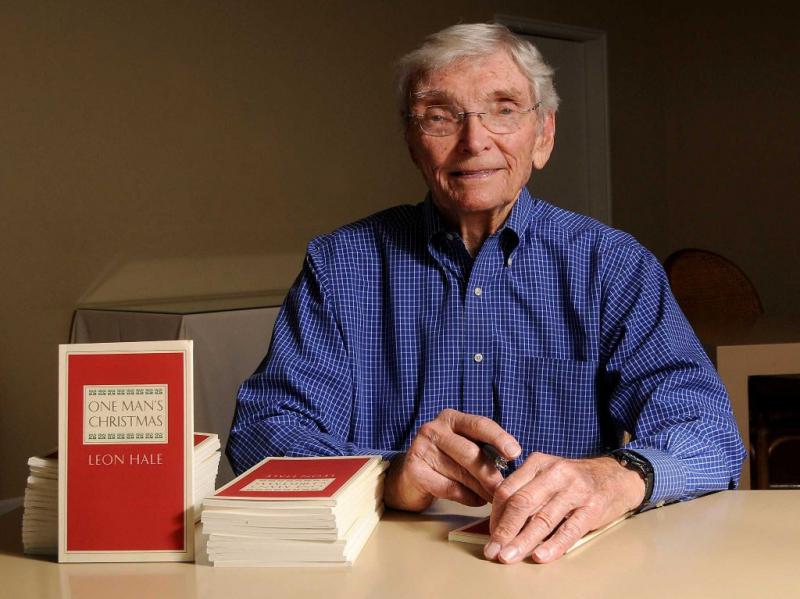 Texas treasure Leon Hale, signs his holiday favorite One Man's Christmas.  After years of reader requests, the new softcover edition of One Man's Christmas is one again available.  Originally published in 1984 by Shearer Publishing, OMC has been expanded with two brand new stories and new illustrations (by Ken Meuzenmayer) in a 5x8-inch format perfect for casual gift giving.

Because we're expecting a large turnout for this event, please preorder your book by November 30th to ensure we have a copy for you.

LEON HALE is an award-winning Houston newspaperman and novelist, the author of eleven books. He retired in 2014 after a sixty-four-year career as a columnist with THE HOUSTON POST and, since 1985, the HOUSTON CHRONICLE, for whom he continues to blog, blog.chron.com/leonhale
He has received the lifetime achievement award from the Texas Institute of Letters as well as awards for fiction and non-fiction from that organization, the Headliners Foundation, United Press International, the Associated Press and others.
A graduate of Texas Tech, Hale fought in World War II, as an aerial gunner on fifty combat missions. He is married and has two children, one stepson, three grandchildren and two step-grandchildren. He divides his time between Houston and Washington County, Texas.

*Per our usual policy, on the first pass through the signing line, KBB will limit you to the featured title plus two backlist per author to keep the line moving. After everyone has had a chance to get their books signed, customers with more backlist titles can go back through and get the rest of them taken care of.

Leon Hale’s well-known gift for warmth and humor finds the ideal subject in this personal recollection. Whether Hale is scrambling to put together a new toy for his children on Christmas Eve, making an unscheduled visit to his own aging parents, or reliving his family’s fraught holiday on a hardscrabble sheep farm during the Great Depression, the unique sensibility that has endeared him to generations of readers shines through every word.

These are stories to savor by oneself or to read out loud to loved ones of all ages during the holiday season, when we discover again in our own memory the reasons why this time of year is so special.