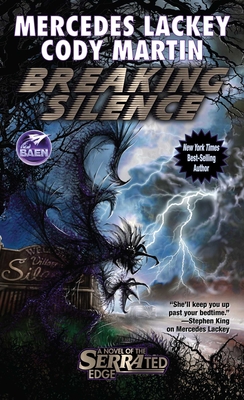 By Mercedes Lackey, Cody Martin
$8.99
In Stock at Our Warehouse - Usually Ships in 1-5 Days

This is book number 10 in the Serrated Edge series.

FIGHT FOR THE SOUL OF SILENCE

When Staci was first shunted off to the backwater town of Silence, Maine, to live with her alcoholic mother, she thought her life was over. Silence had none of the amenities a typical teen in the twenty-first century considered essential: no cell service and barely any internet connectivity. But Staci soon learned that Silence was more than a town left behind by progress. The first family of Silence, the Blackthorns, liked the town that way. The Blackthorns were dark elves who fed off the misery of the residents of Silence.

But now, all that's changing for the better. With the help of Staci and her friends, the Blackthorns have been all but defeated. Industry is returning to Silence, and Staci's mom is improving with each passing day. There's even a cute new busboy at the diner.

But evil dies hard. And Staci, now a mage-in-training, senses that the Blackthorns have not yet given up. The soul of Silence is on the line, and it is up to Staci and her friends to fight back against the encroaching darkness.

About Breaking Silence:
“. . . a wide assortment of fantastical foes adds variety and drama to the narrative. Returning fans will appreciate this solid series entry.”—Publishers Weekly

The Other World (omni contains When the Bough Breaks and Wheels of Fire) by Mercedes Lackey, Mark Shepherd and Holly Lisle

Mercedes Lackey is the New York Times best-selling author of the Bardic Voices series and the Serrated Edge series (both from Baen), the Heralds of Valdemar series, and many more. Among her popular Baen titles are The Fire Rose, The Lark and the Wren, and also The Shadow of the Lion and Burdens of the Dead with Eric Flint and Dave Freer. She lives in Oklahoma.

Cody Martin is a coauthor with Mercedes Lackey of five other books in the metahero saga The Secret World Chronicles. He is also the coauthor of the previous entry in The Serrated Edge series, Silence. He is an avid gamer, but spends his extra time chained to a computer, writing. Originally from Scottsdale, Arizona, he currently resides in Florida.