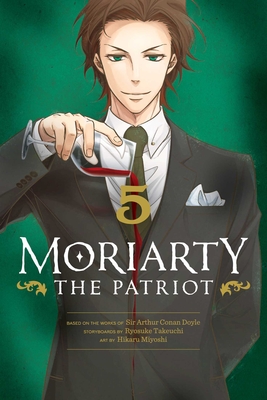 By Ryosuke Takeuchi, Hikaru Miyoshi (Illustrator), Sir Arthur Doyle (From an idea by)
$9.99

Before he was Sherlock’s rival, Moriarty fought against the unfair class caste system in London by making sure corrupt nobility got their comeuppance. But even the most well-intentioned plans can spin out of control—will Moriarty’s dream of a more just and equal world turn him into a hero…or a monster?

William James Moriarty and Sherlock Holmes meet again on a train back to London, and a dead body is discovered in a locked passenger cabin. With John Watson named as the prime suspect, Sherlock challenges Moriarty to a contest of who can solve the murder first. Will Sherlock be able to clear Watson’s name? Back in London, a state secret that only the royal family is privy to has been stolen and MI6 is tasked with retrieving it, lest the whole empire fall into ruin! Meanwhile, Sherlock is visited by the king of Bohemia, who asks him to cover up a recent scandal…

Ryosuke Takeuchi was born November 20, 1980, in Hyogo, Japan, and is a manga artist and writer. He got his big break in 2011 with ST&RS, his first serialized Weekly Shonen Jump series. He later did the storyboards for All You Need Is Kill.

Hikaru Miyoshi is a manga artist whose previous work includes Inspector Akane Tsunemori, which was based on the popular anime Psycho-Pass.

Takeuchi and Miyoshi began collaborating on Moriarty the Patriot in 2016.