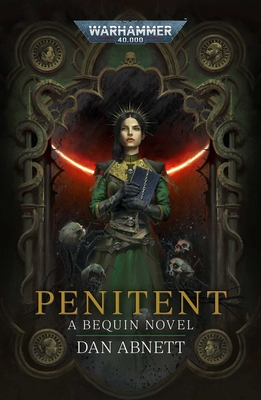 Book 2 in the Bequin Saga.

In the mysterious city of Queen Mab, the forces of light and darkness are locked in a murderous struggle for truth. The dedicated agents of the Holy Inquisition battle with their shadowy counterparts, the infamous Cognitae, to discover the encrypted identity of the enigmatic, all-powerful King in Yellow. Caught at the heart of this struggle is the pariah Alizebeth Bequin. Will she stand with the Inquisition or with the Cognitae that raised her? And if she chooses the Inquisition, will it be the wise but ruthless Ravenor or his rival, the denounced heretic Eisenhorn? Bequin must withstand an onslaught of angels, daemons, and even the monstrous warriors of the Traitor Legions, to unpick the greatest riddle of her life.

The beloved characters of Eisenhorn and Ravenor return, as implaccable adversaries in a novel of esoteric mystery, macabre intrigue, and vivid action, where the revelation of true identity could mean death… or might shake the Imperium to its very foundations.

Dan Abnett has written over fifty novels, including Anarch, the latest instalment in the acclaimed Gaunt’s Ghosts series. He has also written the Ravenor and Eisenhorn books, the most recent of which is The Magos. For the Horus Heresy, he is the author of Horus Rising, Legion, The Unremembered Empire, Know No Fear and Prospero Burns, the last two of which were both New York Times bestsellers. He also scripted Macragge’s Honour, the first Horus Heresy graphic novel, as well as numerous Black Library audio dramas. Many of his short stories have been collected into the volume Lord of the Dark Millennium. He lives and works in Maidstone, Kent.