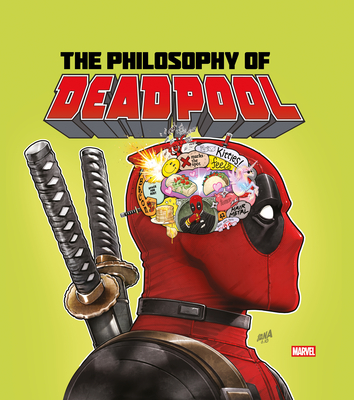 Uncover the wiles and insights of the Merc with a Mouth in this lavishly presented collection of Deadpool's best, worst and frankly outrageous moments from his comic book history.

Deadpool: a mystery wrapped in an enigma wrapped in a frankfurter skin suit. Even he doesn't know what the *?@$ is going on in his brain! In this little guide to everyone's favorite mercenary, discover what makes the katana-wielding, gun-toting, insult-firing anti-hero tick, or maybe more accurately in his case, tock.

With a collection of the greatest comic book covers, scenes we love to remember (or forget, depending on your disposition), and the musings of our morally confused comrade, there's sure to be some wisdom gained from the ravings of a psychotic killer who cracks wise more than a comedian on Prozac.

TITAN COMICS have published a range of licensed comics in its five year history, from Doctor Who to Assassin's Creed. Their magazines division has been responsible for the widely successful run of Official Movie magazines for the Marvel Cinematic Universe film series.

“A really solid bargain for fans of the ‘Pool ... readers are treated to glimpses of the man in action as he makes his way through a life that has never been simple or easy for him or anyone around him” - The PullBox

“A documentary in comic book form all about Deadpool, his life, the way he sees the world, why he fights, and deep down to show us readers that even someone as crazy and trigger happy as the ‘Merc with a Mouth,’ can have a genuine and real love ... this is one book every Deadpool fan should read. 9/10” - Pastrami Nation