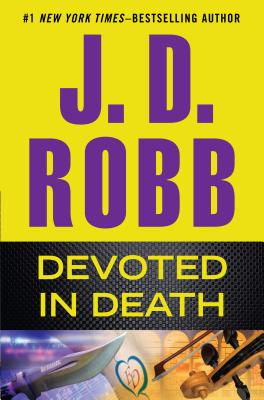 Eve Dallas tracks a young couple whose heated passion for each other is fueled by cold brutality--in the newest crime thriller from the #1 New York Times bestselling author of Obsession in Death and Festive in Death.

When Lieutenant Eve Dallas examines a fresh body in a seedy alleyway in downtown Manhattan, the victim's injuries are so extensive that she almost misses the clue. Carved into the skin is the shape of a heart--initials inside reading "E" and "D"

In Arkansas, Ella-Loo and her recently released ex-con boyfriend, Darryl, don't ever intend to part again. So they hit the road, but then things get a little messy and they wind up killing someone--an experience that stokes a fierce, wild desire in Ella-Loo. A desire for Darryl. And a desire to kill again.

As they cross state lines on their way to New York to find the life they think they deserve, they leave a trail of evil behind them. But now they've landed in the jurisdiction of Lt. Dallas and her team at the New York Police and Security Department. And, with her husband Roarke at her side, Eve has every intention of hunting them down and giving them what they truly deserve

J. D. Robb is the pseudonym for the number one "New York Times" bestselling author of more than two hundred novels, including the futuristic suspense In Death series. Recent titles include "Obsession in Death," "Festive in Death," "Concealed in Death," "Thankless in Death," "Calculated in Death," and "Delusion in Death." There are more than five hundred million copies of the author s books in print."