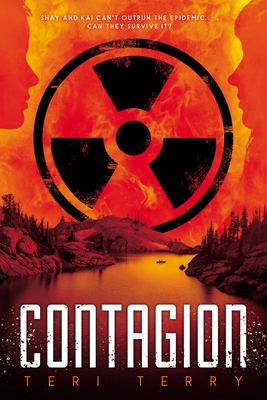 The first book in the spine-tingling Dark Matter trilogy about the frightening effects of a biological experiment gone wrong.

An epidemic is sweeping the country. It spreads fast, mercilessly. Everyone will be infected. . . . It is only a matter of time. You are now under quarantine.

Young teen Callie might have been one of the first to survive the disease, but unfortunately she didn't survive the so-called treatment. She was kidnapped and experimented upon at a secret lab, one that works with antimatter. When she breaks free of her prison, she unleashes a wave of destruction. Meanwhile her older brother Kai is looking for her, along with his smart new friend Shay, who was the last to see Callie alive.

Amid the chaos of the spreading epidemic, the teens must find the source of disease. Could Callie have been part of an experiment in biological warfare? Who is behind the research? And more importantly, is there a cure?

Teri Terry is the award-winning author of several books, including the Slated trilogy, and has been published in the US, Germany, Australia, Canada, and France. She lives in England.

At the Shetland Institute in Scotland, Subject 369X is sick and in desperate need of a cure. She is not allowed to speak, but if she were, she would say that her name is Callie and that she is 12 years old. Hundreds of miles away, in Killin, Scotland, 16-year-old Sharona (Shay) sees a flyer for a missing girl, Callista. Shay has a photographic memory and can pinpoint exactly where and when she last saw the girl: on the day she was abducted. Meanwhile, a “cure” given to Callie for her disease manages to kill her, but her spirit remains and wants revenge. Feeling responsible for not realizing that the missing girl was in trouble a year earlier, Shay reaches out to Callie’s family and meets her brother, Kai. Sparks fly between the two, but as they fall in love, a deadly, contagious flu takes hold of Scotland. In this first volume in a new series, Terry (the Slated trilogy) tackles the science of antimatter and what happens when human experimentation turns into deadly disease. This page-turning near-future paranormal thriller requires some suspension of disbelief, but the love story and mystery will keep readers engaged till the cliffhanger end.
—Publishers Weekly

A deadly virus is wiping out entire communities in Scotland, and three teens are all that stand in the way of the epidemic annihilating all of civilization. One of those teens is already dead: Callie, the little sister of handsome Kai, is a ghost, following her brother and his new girlfriend, Shay. The two of them are among the few immune to the virus and, as such, are tremendously valuable to the doctors in search of a cure. Callie is initially jealous of Shay’s relationship with Kai, but when she discovers that Shay can hear and communicate with her, Callie is thrilled to have contact with a living being. Alternating first-person viewpoints from each protagonist enrich the story. Nonstop action, evil scientists, and plenty of imaginative deaths will engage fans of postapocalyptic fiction. While the abrupt ending of this series starter may frustrate some, two more titles in the Dark Matter trilogy promise many future plot threads to explore.
—Booklist

Teri Terry’s Contagion is a riveting, paranormal start to a new science fiction trilogy. When sixteen-year-old Shay, who’s hooked on quantum physics, realizes that she was the last person to see missing eleven-year-old Callie, she offers to help Callie’s caring older brother, Kai, find her. The two bond instantly, though the search for Callie is soon overshadowed by a lethal pandemic. Though Callie is no longer alive, her strong, vibrant spirit joins Shay and Kai, making them aware of her presence.

This richly imagined story is narrated by Shay and Callie in short, alternating chapters that illuminate each girl’s character. Shay’s growing attachment to Kai plays well against her adolescent insecurity, while Callie copes with jealousy over Shay and Kai’s more and more exclusive relationship. Kai is developed through each girl’s perspective.

The pace is swift, propelled by the teens’ flight from the spreading pandemic, a deepening plot, and fresh revelations about characters’ hidden connections to each other and to the plague itself. The writing is assured and skillful, and the northern Scotland and Shetland Islands settings are used to maximum effect. When Shay and Kai escape by rowboat across a misty, twilit loch, the scene is Druidian in its sense of timelessness. When lines of communication with Callie open, the paranormal elements are naturally incorporated.

This first installment ends with a theory about the origin and vector of the contagion which comes with a shattering realization. There are enough twists to provide a promising foundation for the second book.

Terry’s American debut, the first in the “Dark Matter” trilogy, provides a sinister scientific plot mixed with the supernatural in the form of a contagious epidemic with world-ending consequences. Shay, an older high school student, and 12-year-old Callie are thrown together unexpectedly when Shay experiences a photographic recall of Callie’s abduction from the previous year. The trigger for Shay’s flashback comes from a missing person flyer she stumbles upon at the supermarket, leading her to call the contact number. This is how she meets Callie’s brother Kai. Not realizing how powerful a role her memory will play in the upcoming quest to bring an end to the deadly disease, Shay vows to do whatever she can to help Kai find his younger sister Callie. Little do they know that Callie, who was abducted and experimented on with the deadly disease, is the first to survive its fatal impact. The problem is that her survival caused her to take on a new form, and when she escapes her imprisonment, a wave of destruction is unleashed upon the world. For some mysterious reason, Shay’s and Callie’s families have immunity to the disease’s deadly grip. Set in Scotland and told from Shay’s and Callie’s alternating perspectives, this fast-paced tale accelerates to a cliff-hanger conclusion shortly after Shay comes to a devastating realization. VERDICT Fans of Michael Grant’s “Gone” series, Lauren James’s “The Next Together” series, and Emma Pass’s The Fearless will not be able to wait for the next installment in this survival story that is steeped in mystery and revenge.
—School Library Journal


Twelve-year-old Callie was abducted from the Scottish Highlands, and after being prodded and poked in a secret underground lab on the Shetland Islands, she died in a fire, which turned her from kidnapped science experiment to preteen ghost out for revenge. Callie’s motorcycle-driving half-brother Kai is still committed to finding out what happened to her, and when he meets Shay, a girl with an impressively eidetic memory of the night Callie disappeared, Kai’s brooding dedication and their immediate chemistry lead to the two teens investigating on their own. After Shay catches and survives the “Aberdeen flu,” a mysterious, usually fatal disease spreading through the region, she discovers new telepathic abilities, including the capacity to communicate with Callie. As the epidemic spreads, the military determines that all survivors are potentially threats and tries to use the mass panic of the disease to capture Kai and Shay. This paranormal/sci-fi trilogy starter has clear and focused plotting that will leave readers feeling confident in Terry’s control of both character and audience. The reveals that Shay and Callie are half-sisters or that scientists that would kidnap a child and light her body on fire had evil intentions aren’t necessarily shocking, but the dynamics of kids versus a rapidly spreading epidemic is a promising premise for dramatic future payoff in the forthcoming sequels.
—The Bulletin of the Center for Children's Books