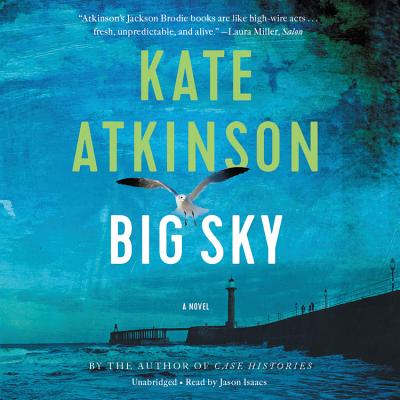 By Kate Atkinson, Jason Isaacs (Read by)
$40.95
Please contact us for more details

One of VanityFair's Best Books of the Year

"Atkinson opens "Big Sky" with one perfect page. It's a bit of a red herring, but it couldn't do a better job of throwing the reader off base and commanding instant interest. It's a short chapter called "Eloping," and if you have a way of looking at it, do. It's a prime example of how Atkinson tells a great story, toys with expectations, deceives by omission, blows smoke and also writes like she's your favorite friend. Thank goodness the long Jackson Brodie hiatus is over."—Janet Maslin, New York Times

"The novel is brimming with the wit and let-justice-triumph tenacity that led the series to print bestsellerdom and a popular BBC-TV series... There isn't a character here - major or minor - who doesn't sashay resplendently off the page. With Atkinson it's Raymond Chandler meets Jane Austen, and amazingly she makes it all work."—The Washington Post's Best Summer Thrillers

"The bestselling British writer returns to Brodie's world for a fifth time in Big Sky, which finds the hero ensconced in a quaint northern English seaside town, making a living as a private investigator. As is often the case in Atkinson's genre-defying fiction, assignments to track lost cats and unfaithful husbands are never quite what they seem."—TIME, 32 Books You Need to Read this Summer

"The plot of Big Sky is something of a ramshackle affair, but it hardly matters. Kate Atkinson is a wayward writer, her books are, in the end, uncategorizable. Her Jackson Brodie novels are both more than crime novels - and less. They are sui generis and they, like this one, are enormously enjoyable."—Katherine A. Powers, Newsday

"The handsome investigator that Kate Atkinson introduced in 2004's Case Histories, played by Jason Isaacs on the BBC series, hasn't appeared in a new book since 2011. If you haven't met him yet, this is a fine place to start... Atkinson is so skilled at getting inside people's heads that when she introduces a new character, it's almost impossible to not feel at least a little sympathy for the person... The gangbuster ending flings a pile of spinning plates in the air. They could be picked up in a swath of new directions, including Jackson or not. But I hope he comes back. He's still the empathetic, flawed, country-music-listening detective we first fell for."—Carolyn Kellogg, The Washington Post

"The great Atkinson has returned to crime fiction and her well-beloved detective, Jackson Brodie...Atkinson masterfully juggles Brodie's consciousness with that of numerous other characters...You flit in and out of their various viewpoints, but Brodie's - warmhearted, weary, haunted by loss - always feels like coming home... I read this book in a delicious late-night rush; I suspect many of you will too."

"Kate Atkinson is one of those very rare writers who's a master at absolutely every aspect of the novel-character and plot and voice and language and themes and humor and dialogue and on and on. I love everything about BIG SKY, a giant mosaic of people and stories that fit perfectly together in a complex, beautiful pattern, offering tremendous reading pleasure on every single page."—Chris Pavone, bestselling author of The Expats

"As always in a Kate Atkinson book... the pleasures derive from her mastery as a storyteller, her skillful character development and the beauty of her quirky and poetic prose."—Associated Press

"'A coincidence is just an explanation waiting to happen' is one of Jackson's maxims; it could also serve as an ironic epigram for Atkinson's approach to the mystery genre. A small cast of characters collides and careens in a manner that straddles Greek tragedy and screwball comedy. The humor is sly rather than slapstick, and Atkinson is keenly interested in inner lives and motivations...The deaths and disappearances that Jackson investigates change with every book, but the human heart remains the central mystery. The welcome return of an existential detective. "—Kirkus, starred review

"We marvel at Atkinson's rare ability to create in a relatively few but stunningly deft brushstrokes at least a half-dozen characters with the depth and complexity to own their own novel. Another dazzler from a writer whose talents know no bounds."

"Atkinson is one of the best writers working today, and her crime fiction, including novels featuring the now-retired Scottish inspector Jackson Brodie, rank among the finest. What takes Big Sky up a notch is its urgent, relevant subject matter: pedophilia rings and how they damage survivors for the rest of their lives."—Bethanne Patrick, The Washington Post

"I simply did not realize how much I missed Jackson Brodie. Turning the pages of Big Sky felt like spending time with a good friend you haven't seen for a long time."—Chicago Tribune

"Raymond Chandler once wrote that the best mysteries are those you'd read even if the last chapter were torn out - because the writing and the characters are so compelling. Big Sky is one of those."—Tampa Bay Times

"As in the other Brodie novels, several stories are woven into a seamless plot, with the help of credible-seeming twists of fate. And there is just enough unfinished business to leave readers impatient for his next outing."—The Economist

"Brodie is back, with panache."—Shelf Awareness