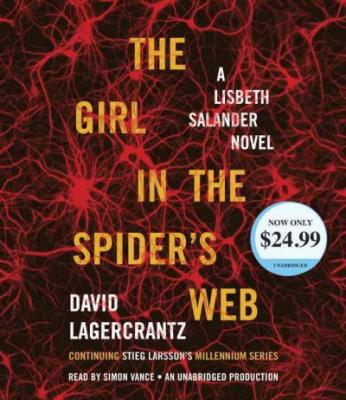 This is book number 4 in the Millennium Series series.

Soon to be a major motion picture starring Claire Foy. Lisbeth Salander and Mikael Blomkvist return in this ripped-from-the-headlines, high-octane follow-up to Stieg Larsson's The Girl Who Kicked the Hornet's Nest.

One of the Best Books of the Year
NPR * USA Today * O, The Oprah Magazine * Esquire

A genius hacker who has always been an outsider. A journalist with a penchant for danger. She is Lisbeth Salander, the girl with the dragon tattoo. He is Mikael Blomkvist, crusading editor of Millennium. One night, Blomkvist receives a call from a source who claims to have been given information vital to the United States by a young female hacker. Blomkvist, always on the lookout for a story, reaches out to Salander for help. She, as usual, has plans of her own. Together they are drawn into a ruthless underworld of spies, cybercriminals, and government operatives—some willing to kill to protect their secrets.

DAVID LAGERCRANTZ is an acclaimed Swedish journalist and author. He has worked as a crime reporter for Expressen, and has written several novels, including the forthcoming Fall of Man in Wilmslow. He worked with international soccer star Zlatan Ibrahimović on his memoir, I Am Zlatan Ibrahimović, which was short-listed for the William Hill Sports Book of the Year award and was nominated for the August Prize in Sweden.

“Salander and Blomkvist have survived the authorship transition intact and are just as compelling as ever . . . Fans of Stieg Larsson’s captivating odd couple of modern detective fiction will not be disappointed.” —Michiko Kakutani, New York Times

“Rest easy, Lisbeth Salander fans—our punk hacker heroine is in good hands . . . A twisty, bloody thrill ride . . . seamlessly woven together by Lagercrantz—in fact, if you hadn’t seen his name on the book jacket, you’d likely assume it was Larsson’s own handiwork . . . An instant page-turner.” —USA Today (4 out of 4 stars)

“Without ever becoming pastiche, the book is a respectful and affectionate homage to the originals . . . Lagercrantz’s continuation, while never formulaic, is a cleaner and tighter read than the originals.” —Guardian

“Lagercrantz has more than met the challenge. Larsson’s brainchildren are in good hands and may have even come up a bit in the world.” —Wall Street Journal

“Lagercrantz does an excellent job . . . Anyone craving more Salander bad-assery should get their hands on a copy of Spider’s Web faster than Lisbeth can hack into the NSA.” —People

“Lagercrantz’s real achievement here is the subtle development of Lisbeth’s character; he allows us access to her complex, alienated world but is careful not to remove her mystery and unknowability. Lisbeth Salander remains, in Lagercrantz’s hands, the most enigmatic and fascinating anti-heroine in fiction.” —Financial Times

“Lagercrantz deftly blends the spirit of Larsson’s work and characters with his own literary skills and bright imagination. Spider’s Web is an intelligent novel that has Salander entangled in one of the most contentious issues of our times . . . Riveting . . . Pyrotechnic.” —Chicago Tribune

“A thrilling next installment . . . In spinning a complex and intriguing new chapter in the adventures of Blomkvist and Salander, Lagercrantz has written a worthy successor to one of the more uniquely compelling thriller sagas of his generation . . . An engrossing novel.” —Paste

“Action-packed and thoroughly enjoyable . . . [A] finely-wrought thriller . . . I will eagerly devour the next adventure for Salander and Blomkvist, especially now that we know their fate lies in the hands of a writer worthy of their story.” —The Daily Beast

“Lagercrantz stays true to Larsson’s vision . . . No doubt about it, Lagercrantz has done a skillful job.” —Sydney Morning Herald

“[A] smart, action-packed thriller that is true to the spirit of the characters Larsson created while adding interesting new ones and updating the political backdrop that made the Millennium series so compelling.” —Buffalo News

“Fans of the original trilogy will be pleased with Lagercrantz’s new installment. The novel is a smart, propulsive thriller and espionage tale with a timely digital age plot (think Snowden and Wikileaks).” —Hollywood Reporter

“Passion and fire, check: there are plenty of both here . . . Fast-moving, credible, and intelligently told. Larsson fans won’t be disappointed.” —Kirkus Reviews

“Lagercrantz pulls it off . . . One devours Larsson’s books for the plots, the action, the anger, and most of all for Lisbeth Salander, a character who resembles Sherlock Holmes or James Bond . . . Lagercrantz has caught her superbly.” —Daily Telegraph (UK)

“David Lagercrantz was set an almost impossible task by Stieg Larsson’s estate when they asked him to write a ‘continuation’ novel featuring Lisbeth Salander. He has carried it out with intelligence and vigour. The Girl in the Spider’s Web conveys the essence and atmosphere of Larsson’s Millennium novels. He has captured the spirit of their characters and devised inventive plots.” —The Times (UK)

“Fans of the original trilogy need not fear . . . The novel is well-researched and more intelligent than the average thriller.” —The Independent (UK)

“Lagercrantz makes sensible decisions in this fourth volume . . . . Blomkvist is given a cleverly and very contemporary storyline . . . A worthwhile read for anyone who’s zipped through the trilogy and finished wanting more.” —Daily Express (UK)

“Sometimes you almost forget that the spine of the book says David Lagercrantz and not Stieg Larsson . . . There is definitely the same narrative zest and love of intrigue, and also the impressive research . . . Lagercrantz has written a thriller that is captivating in its own right.” —Svenska Dagbladet (Sweden)

“Lagercrantz has studied the first three parts of the series well, and the reader will recognize not only their Mikael Blomkvist and Lisbeth Salander and the social criticism, but also other essential parts of the story’s DNA . . . David Lagercrantz has proven that he deserves both attention and respect. ” —Dagens Nyheter (Sweden)