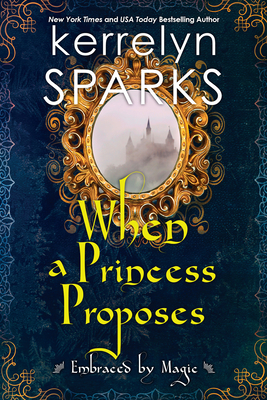 This is book number 3 in the Embraced by Magic series.

When a Princess Proposes by Kerrelyn Sparks is the sixth Embraced/Embraced by Magic book, but the first in a new story arc starring the kids of the couples from the first five books, twenty years later. I am always a fan of Kerrelyn Sparks, but I particularly love this series of fantasy romance. The heroine in this one is Leo and Luciana's daughter, and she's got all the fire and spunk you would expect. The hero is definitely not an alpha male, which I love in a paranormal, but he's still going to do his best to protect his princess. It's got adventure, a road trip, intrigue, and a network of evil priests; a little something for every reader.

Game of Thrones meets The Princess Bride when New York Times and USA Today bestselling author Kerrelyn Sparks merges romance, high fantasy, and humor in her third Embraced by Magic novel. Now a fierce princess with a dangerous magical gift and an eagle shifter must embark on an epic journey to discover who exactly is stalking and killing the Embraced. But even in disguise, there’s no hiding their desire for each other…

Aerthlan’s five Embraced queens have reigned for twenty years, in peace secured by the power of their magic. But now a new and insidious threat has appeared, to test a new generation.

All Princess Eviana needs is an escape. Possessed of an unfortunate and unusual Embraced gift, which she’s been banned from using, she required no training. Now, her overprotective parents want her to wed. As a result, the palace is crammed with obnoxious noblemen…Until Quentin, the enigmatic eagle shifter and royal spy, maneuvers several of the unsuitable suitors into revealing their most embarrassing secrets before the court. Finally, Eviana has an excuse to free herself. If only her family knew the blow that’s shaken her: golden-eyed Quentin’s refusal to let her near…

Heroic, but low born, Quentin’s infatuation with Eviana is as inappropriate as it is unshakable. He must keep away from her, for his own sake. But after a series of suspicious deaths, and the princess’s narrow escape from kidnapping, Quentin knows that only together can they expose the danger stalking Aerthlan’s Embraced. On foot, in disguise, they’ll need trust and quick wits to uncover the vicious conspiracy closing around them. But finding the truth might break down their own defenses as well…

Kerrelyn Sparks is the award-winning, New York Times and USA Today bestselling author of fantasy and paranormal romances, including the Love at Stake, Embraced, and Embraced by Magic series. A three time PRISM Award-winner and a RITA Award finalist, Sparks is a member of Houston RWA and Bay Area RWA. She lives with her family in the Greater Houston area of Texas and can be found online at KerrelynSparks.com.