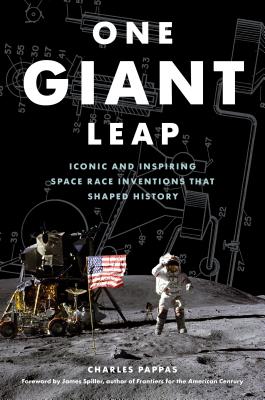 By Charles Pappas, James Spiller (Foreword by)
$24.95
In Stock at Our Warehouse - Usually Ships in 1-5 Days

On July 20, 1969, Americans had their eyes and ears glued to their TVs and radios. NASA's successful moon landing left the nation in awe. This moment inspired inventors and engineers across the nation. To celebrate the 50th anniversary of the 1969 moon landing, we share with you 20 patents that were inspired by the space race and how they reshaped the world. Featuring the original patent schematics from the US Patent and Trademark Office, blast off with the inventions inspired by the moon landing including: Memory foam Freeze-dried food Firefighting equipment Emergency "space blankets" DustBusters Cordless tools Protective paint (Used on both the Statue of Liberty, a gigantic Buddha in Hong Kong and the Golden Gate) Cochlear implants LZR Racer swimsuits CMOS image sensors Moon dust as fuel for space travel Carbon nanotubes Pocket calculators Other patents in the book reflect the general surge in space-related inventions in that era: Dispersed space based laser weapon Toy ray guns Flying saucers Propulsion systems Lasers The modem Integrated circuit Astro Lamp (Later called the Lava Lamp)

Charles Pappas is the Indiana Jones/Captain Ahab/Mr. Peabody of the exhibition industry. He's dug up lost expo photos in Shanghai and located forgotten fair buildings in Mexico City. He has spent years sleuthing out not just the economic impact but also the cultural imprint of trade fairs. Charles has covered the expo industry for Exhibitor magazine for a dozen years and is the industry's de facto historian.He lives in Rochester, MN.