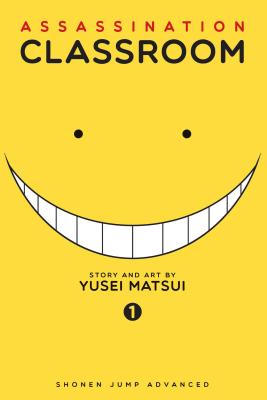 By Yusei Matsui
$9.99
Backordered - Availablilty Will be Delayed

This is book number 1 in the Assassination Classroom series.

What does a pathetic class of misfits have in their arsenal to combat their schoolteacher’s alien technology, bizarre powers and...tentacles?!

Ever caught yourself screaming, “I could just kill that teacher”?

What would it take to justify such antisocial behavior and weeks of detention? Especially if he’s the best teacher you’ve ever had? Giving you an “F” on a quiz? Mispronouncing your name during roll call...again? How about blowing up the moon and threatening to do the same to Mother Earth—unless you take him out first?! Plus a reward of a cool 100 million from the Ministry of Defense!

Okay, now that you’re committed... How are you going to pull this off? What does your pathetic class of misfits have in their arsenal to combat Teach’s alien technology, bizarre powers and...tentacles?!

Meet the would-be assassins of class 3-E: Sugino, who let his grades slip and got kicked off the baseball team. Karma, who’s doing well in his classes but keeps getting suspended for fighting. And Okuda, who lacks both academic and social skills, yet excels at one subject: chemistry. Who has the best chance of winning that reward? Will the deed be accomplished through pity, brute force or poison...? And what chance does their teacher have of repairing his students’ tattered self-esteem?

Yusei Matsui was born on the last day of January in Saitama Prefecture, Japan. He has been drawing manga since he began elementary school. Some of his favorite manga series are Bobobo-bo Bo-bobo, JoJo's Bizarre Adventure, and Ultimate Muscle. Matsui learned his trade working as an assistant to manga artist Yoshio Sawai, creator of Bobobo-bo Bo-bobo. In 2005, Matsui debuted his original manga Neuro: Supernatural Detective in Weekly Shonen Jump. In 2007, Neuro was adapted into an anime. In 2012, Assassination Classroom began serialization in Weekly Shonen Jump.