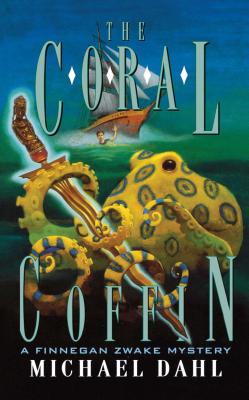 This is book number 5 in the Finnegan Zwake series.

WHAT IS THE TURTLE'S NAME? MY NAME'S FINN, I SAID. THE PIRATES GASPED. THE GIANT PEERED DOWN AT ME. I FELT LIKE A BUG UNDER HER BOOT. FINN, SHE SAID. A GOOD NAME FOR SOMEONE WHO WILL JOIN THE FISH. Swept overboard during a thunderstorm in the South Seas, thirteen-year-old Finn lands on a tropical island, with palm trees, nesting turtles, beautiful sunsets, and...a dead body. Finn and his famous mystery-writer Uncle Stoppard traveled to the Great Barrier Reef in search of Finn's long-missing archaeologist parents. Instead they are both picked up by a ship full of fierce modern-day pirates and their fearless female leader, Blue Jade. No sooner are Finn and his uncle onboard when mayhem breaks loose: someone is secretly poisoning the crew members, one by one. Furious, Blue Jade gives Finn and Uncle Stop twenty-four hours to find the killer and prove their own innocence. Otherwise they will face her deadly pets Mittens and Fluffy, two man-killing blue-ringed octopuses....