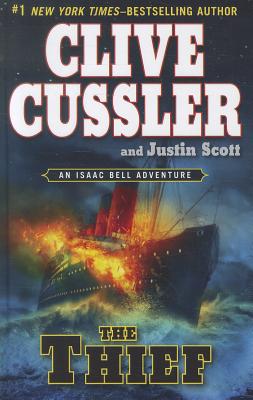 By Clive Cussler, Justin Scott
Email or call for price
Out of Print

On the ocean liner "Mauretania," two European scientists with a dramatic new invention are barely rescued from abduction by the Van Dorn Detective Agency's intrepid chief investigator, Isaac Bell. Unfortunately, they are not so lucky the second time. The thugs attack again-and this time one of the scientists dies. What are they holding that is so precious? Only something that will revolutionize business and popular culture-and perhaps something more.

For war clouds are looming, and a ruthless espionage agent has spotted a priceless opportunity to give the Germans an edge. It is up to Isaac Bell to figure out who he is, what he is up to, and stop him. But he may already be too late . . . and the future of the world may just hang in the balance. AUTHOR BIOS: Clive Cussler is the author of many "New York Times" bestsellers, most recently "The Kingdom, The Race, and Devil's Gate." He lives in Arizona. To learn more about Clive Cussler, please visit www.cusslerbooks.com.
Justin Scott's twenty-six novels include "The Shipkiller" and "Normandie Triangle"; the Ben Abbott detective series; and five modern sea thrillers published under his pen name Paul Garrison. He is the coauthor with Clive Cussler of "The Wrecker, The Spy," and "The Race." He lives in Connecticut.