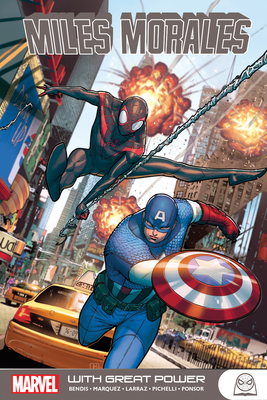 Nick Fury has declared Miles Morales a super hero; now, it's time for that super-hero rite of passage: the team-up! But the new Spider-Man's first team-up couldn't possibly be with the Prowler, could it? It will be if it's up to Miles' Uncle Aaron, who's not above resorting to threats to get his way. But Miles isn't going to take such manipulation lying down, setting up a titanic battle of wills between uncle and nephew - with the Scorpion caught in the middle! Miles Morales has the powers. He has the costume. Now, he even has the web-shooters. With aid from Peter's former girlfriends, Gwen Stacy and Mary Jane Watson, Miles confronts the dark side of the Parker legacy. And as his life is turned upside down once again, he learns that - for Spider-Man - with great power there also comes great tragedy.