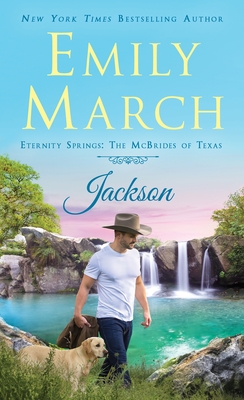 This is book number 16 in the Eternity Springs series.

Sometimes it takes a new beginning
Caroline Carruthers thinks she buried her dreams along with the love of her life…until a stranger named Celeste dares her to chase a dream all on her own. Moving to Redemption, Texas, is chapter one in Caroline’s new life story. Opening a bookstore is the next. Finding love is the last thing on her mind as she settles into this new place called home. But when she meets a handsome, soulful man who’s also starting over, all bets are off.

to reach a happily-ever-after
Jackson McBride came to Redemption looking only to find himself, not someone to love. Ever since his marriage ended, he’s been bitter. Sure, he used to believe in love—he even has the old song lyrics to prove it—but the Jackson of today is all business. That is, until a beautiful young widow who’s moved to town inspires a change of heart. Could it be that the myth of Redemption’s healing magic is true…and Jackson and Caroline can find a second chance at a happy ending after all?

Emily March is the New York Times, Publishers Weekly, and USA Today bestselling author of over thirty novels, including the critically acclaimed Eternity Springs series. Publishers Weekly calls March a "master of delightful banter," and her heartwarming, emotionally charged stories have been named to Best of the Year lists by Publishers Weekly, Library Journal, and Romance Writers of America.
A graduate of Texas A&M University, Emily is an avid fan of Aggie sports and her recipe for jalapeño relish has made her a tailgating legend.

“March’s contemporary spin-off from her long-running Eternity Springs series is off to a promising start with this story of starting over…March is skilled at writing page-turners with sympathetic characters, and fans will enjoy visiting with many friends from Eternity Springs…” — Publishers Weekly