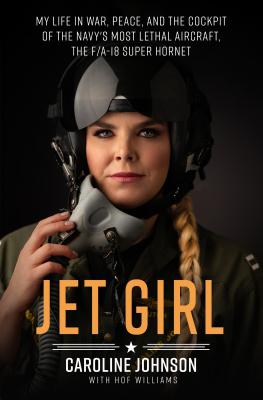 A fresh, unique insider’s view of what it’s like to be a woman aviator in today’s US Navy—from pedicures to parachutes, friendship to firefights.

Jet Girl tells the remarkable story of the women fighting at the forefront in a military system that allows them to reach the highest peaks, and yet is in many respects still a fraternity. Johnson offers an insider’s view on the fascinating, thrilling, dangerous and, at times, glamorous world of being a naval aviator.

This is a coming-of age story about a young college-aged woman who draws strength from a tight knit group of friends, called the Jet Girls, and struggles with all the ordinary problems of life: love, work, catty housewives, father figures, make-up, wardrobe, not to mention being put into harm’s way daily with terrorist groups such as ISIS and world powers such as Russia and Iran.

Some of the most memorable parts of the book are about real life in training, in the air and in combat—how do you deal with having to pee in a cockpit the size of a bumper car going 600 miles an hour?

Not just a memoir, this book also aims to change the conversation and to inspire and attract the next generation of men and women who are tempted to explore a life of adventure and service.

CAROLINE JOHNSON was an F/A-18 Weapons Systems Officer (WSO) in the US Navy. During her deployment aboard the USS George H.W. Bush aircraft carrier, she flew missions in Afghanistan, Iraq and Syria and was one of the first women to neutralize ISIS. Later during her Navy career, Caroline became a Senior Leadership instructor at the United States Naval Academy. She is now a professional speaker in the private sector.

HOF WILLIAMS lives in Westport, Connecticut and has collaborated with Scott McEwen on the young adult novel, Camp Valor.

"A realistic look at a difficult, dangerous profession." —Kirkus Reviews

"An enthusiastic narrator, Johnson’s love of flying comes through clearly. This no-holds-barred account will interest aviation buffs and those invested in making the military more welcoming to women." —Publishers Weekly

“History, heart and heroism. You will find it all in Jet Girl, and you will be thrilled by the journey."
—Gayle Tzemach Lemmon, author of Ashley’s War: The Untold Story of a Team of Women Soldiers on the Special Ops Battlefield

"Fans of military biographies and memoirs will enjoy this inside look at the experiences of a determined woman in the cockpit." —Booklist