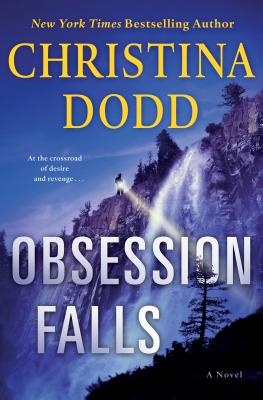 This is book number 2 in the The Virtue Falls Series series.

In Obsession Falls, New York Times bestselling author Christina Dodd returns to the town of Virtue Falls, Washington-an idyllic place on the surface, but one that holds close its secrets...

When Taylor Summers witnesses the death threat to a young boy, she does the only thing she can do-she sacrifices herself to distract the killers. Her reward is a life in ruins, on the run in the wilderness, barely surviving a bitter winter and the even more bitter knowledge she has lost everything: her career, her reputation, her identity. She finds refuge in Virtue Falls, and there comes face to face with the knowledge that, to live her life again, she must enlist the help of the man who does not trust her to defeat the man who would destroy her.

She's being hunted, but it's time to turn the tables....

“Christina Dodd mixes a chilling cocktail of suspense and romance in Obsession Falls…With enthralling characters and an intriguing and imaginative premise, this is a spooky, nerve-stretching read that is sure to please Dodd’s many fans.” –BookPage (Book of the Day)

“Dodd delivers another white-knuckle tale of romantic suspense that moves her even closer to the thriller end of the literary spectrum. The plot's twists and turns are handled with a positively Hitchcockian touch, while the brilliantly etched characters, polished writing, and unexpected flashes of sharp humor are pure Dodd.” —Booklist (starred review) on Obsession Falls

“With a gritty, resourceful heroine, a whip-smart determined hero and an equally dazzling miscreant, this one is impossible to put down. A remarkable, mesmerizing series.” —Library Journal (starred review) on Obsession Falls

“Taut and enthralling, with romantic and supernatural embellishments that intensify the drama.” —Kirkus Reviews on Obsession Falls

“Dodd is back with the second extraordinary Virtue Falls book. This gut-wrenching tale of determination and survival is amazing to read. The evolution of this heroine from everyday individual to relentless survivor adds an intensity that will keep you on the edge of your seat. The villain in this case is charismatic, vicious, and terrifyingly capable. This is one you won't soon forget!” —Romantic Times (4 1/2 stars, Top Pick!)

“A winning read. Intense and suspenseful, with touches of romance, humor and mysticism.” —Kirkus Reviews on Virtue Falls

“Dodd slowly ratchets up the suspense level to the breaking point, while introducing readers to the diverse and quirky characters...[A] nail-biting book.” —Booklist, starred review on Virtue Falls

“The characters are flawed, three-dimensional, and compelling.” —Library Journal on Virtue Falls

“Edge of the seat suspense and fascinating premise. Couldn't put it down. My kind of thriller!” —Iris Johansen on Virtue Falls

“Tight, edgy, and compelling, Virtue Falls redefines the romantic thriller. This is my favorite kind of suspense... I loved it. Fans of Nora Roberts will devour Virtue Falls.” —Jayne Ann Krentz on Virtue Falls

“Compulsively readable...I love all the characters, all the stories, and the chilling violence that binds them all together.” —Elizabeth Lowell on Virtue Falls

“What an absolute thrill ride of a book! Sign me up for anything Christina Dodd writes.” —Karen Robards on Virtue Falls

“Chilling, compelling and relentlessly tense. This dark and powerful psychological thriller will surprise you, haunt you, and captivate you. Virtue Falls is full of secrets-and like Christina Dodd-is a force of nature!” —Hank Phillippi Ryan on Virtue Falls