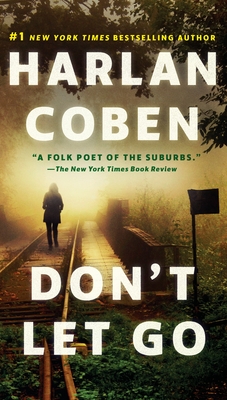 With unmatched suspense and emotional insight, Harlan Coben explores the big secrets and little lies that can destroy a relationship, a family, and even a town in this powerful new thriller.

Suburban New Jersey Detective Napoleon “Nap” Dumas hasn't been the same since senior year of high school, when his twin brother Leo and Leo’s girlfriend Diana were found dead on the railroad tracks—and Maura, the girl Nap considered the love of his life, broke up with him and disappeared without explanation. For fifteen years, Nap has been searching, both for Maura and for the real reason behind his brother's death. And now, it looks as though he may finally find what he's been looking for.

When Maura's fingerprints turn up in the rental car of a suspected murderer, Nap embarks on a quest for answers that only leads to more questions—about the woman he loved, about the childhood friends he thought he knew, about the abandoned military base near where he grew up, and mostly about Leo and Diana—whose deaths are darker and far more sinister than Nap ever dared imagine.

Harlan Coben is the #1 New York Times and internationally bestselling author of thirty previous novels, including Don't Let Go, Home, Fool Me Once, The Stranger, Missing You, Six Years, Stay Close, Live Wire, Caught, Long Lost, and Hold Tight, as well as the Myron Bolitar series and a series aimed at young adults featuring Myron's nephew, Mickey Bolitar. The winner of the Edgar, Shamus, and Anthony Awards, he lives in New Jersey.

“Harlan Coben is a folk poet of the suburbs and his well-tuned new mystery, Don’t Let Go, shows why. Coben does his usual professional job on the central mystery...but his greater talent lies in his warmhearted descriptions of life in places like Westbridge.”—Marilyn Stasio, New York Times Book Review

“Ernest Hemingway could have learned a tip or two from Coben’s direct and punchy writing style. And Coben deftly intersperses his action sequences with observations about human behavior.”—Steve Forbes, Forbes online

“Harlan Coben is the modern master of the hook-and-twist luring you in on the first page...only to shock you on the last.”—Dan Brown

“Simply one of the all-time greats—pick up any one of his thrillers and you’ll find a riveting, twisty, surprising story with a big, beating heart at its core.”—Gillian Flynn

“Harlan Coben's addictive crime novels keep readers on the edge of their seat. Get ready for twists, turns, reversals, and you'd-never-guess-it plot twists. His thrillers are virtuoso mysteries that expose the dark side of familiar settings. Prepare yourself for relatable characters, crackling prose, and shocking endings.”—Reader's Digest “The Most Binge-Worthy Authors of All Time”

“[Nap] is both endearing and sometimes quite witty. Coben is the master of these types of characters while exposing the hidden layers of suburbia.”—Associated Press

“[A] shattering tour de force of a classic mystery wrapped in the fabric of the kind of...thriller nobody writes better.”—Providence Journal

“Harlan Coben is one of the best suspense novelists out there today.”—The Huffington Post

“Coben knows how to deliver an exciting thriller expertly. His latest novel is no exception.”—Library Journal

“Certain teams (the Yankees), performers (Springsteen), and shows (The Sopranos) exist at such a rarified level of excellence that our expectations become unreasonable...Harlan Coben...belongs in this rarified category.”—Newark Star-Ledger

“You won’t be able to put it down once you open it....Get this book now.”—Bookreporter.com