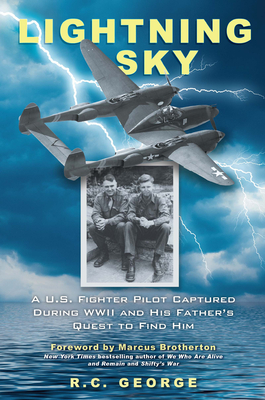 A U.S. fighter pilot captured by the enemy. A father determined to rescue his son. One of the most remarkable and moving true stories of faith and perseverance to come out of World War II.

October 6, 1944. Twenty-year-old Army Air Corps Second Lieutenant David “Mac” Warren MacArthur was on a strafing mission over Greece when a round of 88-mm German anti-aircraft flak turned his P-38 Lightning into a comet of fire and smoke. Dave parachuted to safety as the Lightning lived up to her name and struck the Adriatic Sea like a bolt of flames. In minutes, he was plucked from the water—only to find himself on the wrong end of a German rifle pointing straight at his head.

Dave’s father, Lieutenant Colonel Vaughn MacArthur, was a chaplain with the 8th Armored Division of Patton’s Third Army when he learned of his son’s capture. He made it his personal mission to find him. For the duration of the war, as Dave was shuttled from camp to camp—including Dachau—his father never stopped searching. Then in May 1945, Vaughn’s last hope was Stalag VII-A in Moosburg, Germany. Through the barbed wire fence, he cried out his son’s name. Incredibly, out of tens of thousands of POWs, one of them, squinting into the sunlight, turned and smiled.

Father and son spent the next two weeks together celebrating, a forever cherished memory. Over the next twenty-five years, Dave would go on to honor his father on rescue missions of his own, becoming a highly decorated and genuine American war hero. In both Korea and Vietnam, Dave would carry with him the legacy of a great man who gave everything to save his son.

An inspiring, harrowing, and unforgettable chronicle of love of family and love of country, Lightning Sky is a timeless testament to extraordinary lives in extraordinary times.

“A glowing reminder that some things in life are worth fighting for.”
—Marcus Brotherton, New York Times bestselling author of We Who Are Alive & Remain, A Company of Heroes and Shifty’s War

“This is how history should be written—in vivid detail and with all the emotion of the best-told stories. Fans of Flyboys and Unbroken should push this book to the top of their reading list.”
—John Gilstrap, New York Times bestselling author of Scorpion Strike and the Jonathan Grave thriller series

“You will be inspired . . . you will mourn a greatness that has all but passed. In four or five years they will all be gone; the words of soldiers like this one, our only hope of holding onto them.”
—Ken Gire, New York Times bestselling collaborator for All the Gallant Men

“The research is meticulous and the tale is well written, almost like a novel. It is optimistic and realistic, both funny and sad. A wonderful retelling of an individual story of World War II that combines the universal bond between parent and child and a war story.  VERDICT: Highly recommended for any listener interested in war, family, or just a good story.”
—Library Journal on the audio edition