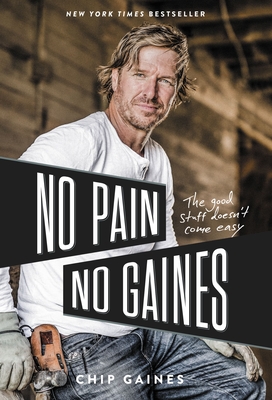 That's been true ever since he was a little pint-sized hustler selling candy and Capri Suns down at the public tennis courts in northeast Texas. You've probably seen him sweat on his television show, Fixer Upper. Deep in his bones he has always known that hard work yields great results, even when there's little observable evidence of it. On the cusp of launching into what might be the hardest work he and his wife, Joanna, have ever done--building a network--Chip realized that none of it would be possible without his network of people.

Call it a network, a community, a home team. We've all got one. Today it might be made up of your family, your neighbors, the people you work with. But if you want a network that will pull you into a life of meaning, a life of joy and connection, you need to be intentional about choosing the people in it. People who are enlivened and electrified by the power of living according to their purpose, who are always in pursuit of lifelong learning, and who have a sincere belief that relationships are more than transactions. Chip Gaines has been building that kind of network his whole life, and he can tell you, it doesn't come easy.

To say it requires sweat equity would be an understatement. It requires faith in people. It requires hope. And it requires a willingness to grow even when it hurts. From hard-won lessons and personal stories from Chip, No Pain, No Gaines is a by-the-bootstraps manual for building a network you can count on.

Chip Gaines is the cofounder of Magnolia, a home and lifestyle brand based in Waco, Texas, which he started with his wife, Joanna, in 2003. Born in Albuquerque and raised in the Dallas/Ft. Worth area, Chip graduated from Baylor University's Hankamer School of Business with a degree in marketing. An entrepreneur by nature, he started and sold many small businesses before the world came to know him and Joanna through HGTV's Fixer Upper. He is the author of two New York Times bestsellers, The Magnolia Story and Capital Gaines: Smart Things I Learned Doing Stupid Stuff. This October, Chip and Joanna return to television with the launch of the Magnolia Network.