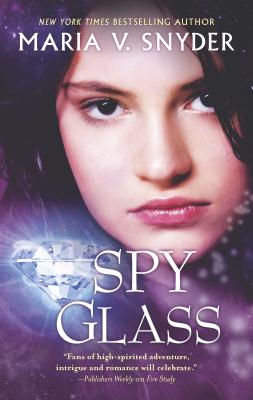 By Maria V. Snyder
$9.35
Please contact us for more details

This is book number 6 in the Chronicles of Ixia series.

In this riveting conclusion to Opal Cowan's saga, the young magician will discover that glass holds many secrets... including the key to her plight.

After siphoning her own blood to defeat her enemy, Opal Cowan lost everything--including her powers. Moreover, her choice has made her immune to the effects of magic. Once a trusted protegee, Opal is now an outsider looking in, spying on those with the powers she once had, powers that make a difference in her world.

Until spying through glass unlocks something new within her. Suddenly the beautiful pieces she makes flash in the presence of magic. She also discovers that someone has stolen some of her blood for nefarious purposes--and that finding it might allow her to regain her powers. As she sets out on a new journey, she'll learn, once and for all, if her powers are lost forever... and what she would sacrifice to regain them.

Maria V. Snyder is the "New York Times" bestselling author of the Study series, the Glass series, the Healer series, "Inside Out," and "Outside In." Born and raised in Philadelphia, she earned a Bachelors of Science degree in Meteorology from Penn State and a Master of Arts degree in fiction writing from Seton Hill University. Unable to part ways with Seton Hill, Maria is currently a teacher and mentor for the MFA program. Find her on the Web at MariaVSnyder.com.

"Snyder's storytelling skills continue to build an involving story line with an engaging and resourceful heroine."

"Filled with Snyder's trademark sarcastic humor, fast-paced action and creepy villainy, Touch of Power is a spellbinding romantic adventure that will leave readers salivating for the next book in the series."

-USA TODAY on Touch of Power

"This is one of those rare books that will keep readers dreaming long after they've read it."
-Publishers Weekly Starred Review on Poison Study