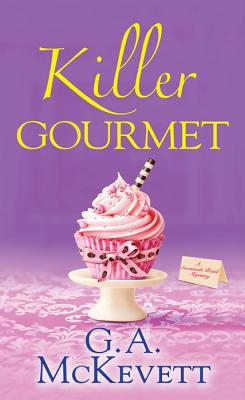 By G. A. Mckevett
Email or call for price
Hard to Find

This is book number 20 in the A Savannah Reid Mystery series.

Plus-sized P.I. Savannah Reid and her pals at the Moonlight Magnolia Detective Agency know a thing or two about fine dining. But when murder shows up on the menu, it's time to go back to the kitchen. . .

When the Moonlight Magnolia gang learns their friends Ryan Stone and John Gibson are planning to open a chic new restaurant, they eagerly offer their input on everything. But all Ryan and John can think about is how excited they are to have hired the temperamental but talented chef Baldwin Norwood. Too bad the only thing being sliced and diced in the kitchen is the chef himself. . .

As Savannah turns her attention from munchies to murder, she quickly realizes the cantankerous chef left a bad taste in everyone's mouth. Now, Savannah has her work cut out for her, and just when she thinks there couldn't be any more suspects, she uncovers a plot more precarious than a perfect soufflé. . .

G.A. McKevett is the author of the acclaimed Savannah Reid mystery series. Also writing under the name Sonja Massie, she has authored over 60 books ranging from cozy mysteries, to historical romances, to nonfiction works on the history of Ireland. Her earthy humor and fast-paced plots delight her fans, while critics applaud her offbeat characterizations and incisive observations on human nature. Irish by ancestry, she has lived in Toronto, Ireland and Los Angeles, but now resides in New York. Readers can visit her online at www.SonjaMassie.com.

Praise For G.A. Mckevett And The Savannah Reid Mysteries

Buried In Buttercream
"A wonderful edition to the series." --Suspense Magazine

Corpse Suzette
"Savannah's as feisty as ever." --Kirkus Reviews

Murder A La Mode
"Added to a well-plotted mystery, the very funny depiction of a different side of reality television makes Murder á la Mode a delight." --Mystery Scene