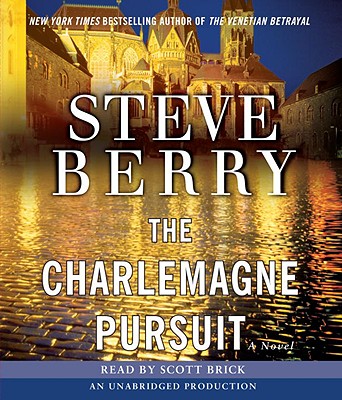 As a child, former Justice Department agent Cotton Malone was told his father died in a submarine disaster in the North Atlantic, but now he wants the full story and asks his ex-boss, Stephanie Nelle, to secure the military files. What he learns stuns him: His father’s sub was a secret nuclear vessel lost on a highly classified mission beneath the ice shelves of Antarctica.

But Malone isn’t the only one after the truth.

Twin sisters Dorothea Lindauer and Christl Falk are fighting for the fortune their mother has promised to whichever of them discovers what really became of their father–who died on the same submarine that Malone’s father captained.

The sisters know something Malone doesn’t: Inspired by strange clues discovered in Charlemagne’s tomb, the Nazis explored Antarctica before the Americans, as long ago as 1938. Now Malone discovers that cryptic journals penned in “the language of heaven,” inscrutable conundrums posed by an ancient historian, and the ill-fated voyage of his father are all tied to a revelation of immense consequence for humankind.

In an effort to ensure that this explosive information never rises to the surface, Langford Ramsey, an ambitious navy admiral, has begun a brutal game of treachery, blackmail, and assassination. As Malone embarks on a dangerous quest with the sisters–one that leads them from an ancient German cathedral to a snowy French citadel to the unforgiving ice of Antarctica–he will finally confront the shocking truth of his father’s death and the distinct possibility of his own.

Steve Berry is the "New York Times" and #1 internationally bestselling author of "The Lincoln Myth, The King's Deception, The Columbus Affair, The Jefferson Key, The Emperor's Tomb, The Paris Vendetta, The Charlemagne Pursuit, The Venetian Betrayal, The Alexandria Link, The Templar Legacy, The Third Secret, The Romanov Prophecy, "and" The Amber Room." His books have been translated into 40 languages with more than 18,000,000 copies in 51 countries.

"In bestseller Berry's fourth thriller to feature ex–Justice Department agent Cotton Malone (after The Venetian Betrayal), Malone embarks on a search for answers about his father, Capt. Forrest Malone, after learning that instead of dying in 1971 in a nuclear sub accident in the North Atlantic, his father actually died while on a secret submarine mission to the Antarctic. Meanwhile, bad guy Adm. Langford Ramsey schemes to become the next ranking officer of the Joint Chiefs of Staff. The two story lines merge as a group led by Malone races to Antarctica, where they find a strange underground city belonging to the Aryans, an advanced race who inhabited the earth at the dawn of our own civilization. A meticulous researcher, Berry carefully integrates such elements as Charlemagne, Nazis, ancient manuscripts, historical puzzles and scientific surprises into the plot. Those who relish suspense in the Da Vinci Code vein will snap this one up, the best yet in the series." - Publishers Weekly (starred review)

"Berry outdoes himself in his latest Cotton Malone adventure (after The Venetian Betrayal ). Using his connections in the federal government, Cotton asks to see a classified file that details the mission that resulted in his father's death. He knew his father died on a submarine but none of the shocking details about where or why he died. But Cotton is not the only person who wants this file, and they kill to get it. Nazi missions to the Antarctic, ancient societies, and a valuable artifact from Charlemagne's tomb all play key roles as Malone uncovers the truth. So much is going on that there is enough material for two good books, let alone one great one. Mixed in with the complicated action, Berry finds the time to explore the characters as well, making this his most personal and best book to date. For all fiction collections." - Library Journal