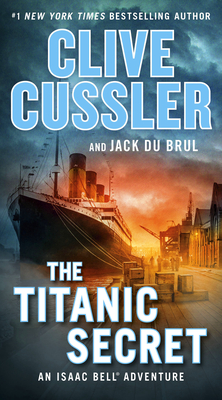 In the present day, Pitt makes a daring rescue from inside an antiquated submersible in the waters off New York City. His reward afterward is a document left behind a century earlier by legendary detective Isaac Bell--a document that reopens a historical mystery...

Clive Cussler is the author of more than seventy books in five bestselling series, including Dirk Pitt, NUMA Files, Oregon Files, Isaac Bell, and Sam and Remi Fargo. His life nearly parallels that of his hero Dirk Pitt. Whether searching for lost aircraft or leading expeditions to find famous shipwrecks, he and his NUMA crew of volunteers have discovered and surveyed more than seventy-five lost ships of historic significance, including the long-lost Confederate submarine Hunley, which was raised in 2000 with much publicity. Like Pitt, Cussler collects classic automobiles. His collection features more than one hundred examples of custom coachwork. Cussler and his wife make their home in Arizona.

Jack Du Brul is the author of the Philip Mercer series, most recently The Lightning Stones, and is the coauthor with Cussler of the Oregon Files novels Dark Watch, Skeleton Coast, Plague Ship, Corsair, The Silent Sea, and The Jungle. He lives in Vermont.