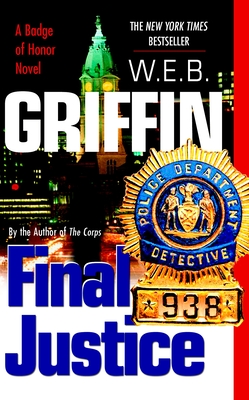 By W.E.B. Griffin
Email or call for price
Special Order - Subject to Availability

This is book number 8 in the Badge Of Honor series.

Just as with his remarkable military novels, millions of readers have been captured by the rich characters and vivid realism of W. E. B. Griffin’s police dramas. “Griffin has the knack,” writes The Philadelphia Inquirer. He “sets his novel before you in short, fierce, stop-for-nothing scenes. Before you know it, you’ve gobbled it up.”

Now, in Final Justice, Detective Matt Payne of the Philadelphia police department—newly promoted to sergeant and assigned to Homicide—finds himself in the middle of three major assignments. The first case, a fatal shooting at a fast-food restaurant, seems simple, but rapidly becomes complicated. The second, a rape that tumbled into murder, begins complicated and only gets more so, as it becomes apparent that the crime may be part of a disturbing, and escalating, pattern. The third is the most bizarre, as Payne becomes involved with a local figure who long ago fled the country, leaving behind the mummified body of his girlfriend in a trunk. Ever since, the murderer has been sending taunting postcards from his safe haven—but all that may be about to change.
Weaving in and around this already hectic schedule are the visit to Philadelphia of the self-absorbed star of a series of improbable police movies, who wants Payne to show him “the real stuff,” and the appearance in Payne’s life of two very different women. Either one of them alone would be enough to set his head spinning, but together . . . this might be the most complicating thing of all.
Filled with color and detail and plots as real as the headlines, this is a riveting novel of the men and women who put their lives on the line, from the cop on the beat to the commissioner himself. It’s a story of fears, dangers, courage, loyalty, and genuine heroism: storytelling at its best.

W. E. B. Griffin is the author of seven bestselling series: The Corps, Brotherhood of War, Badge of Honor, Men at War, Honor Bound, Presidential Agent, and now Clandestine Operations. He lives in Fairhope, Alabama, and Buenos Aires, Argentina.