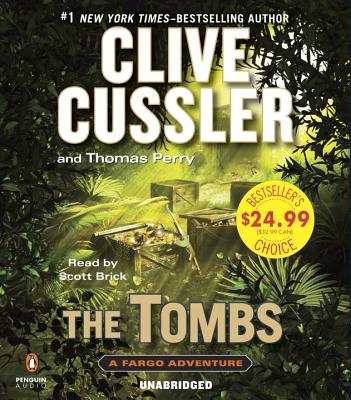 By Clive Cussler, Thomas Perry, Scott Brick (Read by)
$29.24
In Stock at Our Warehouse - Usually Ships in 1-5 Days

This is book number 4 in the A Sam and Remi Fargo Adventure series.

Husband-and-wife team Sam and Remi Fargo are in a race to find the famed burial site of Attila the Hun in this adventure in the #1 New York Times-bestselling series.

When an archeologist friend requests their help to excavate a top-secret historical site, the Fargos are intrigued. But they have no idea that their discoveries will set them on a hunt for a prize beyond all imagination.

The clues point to the hidden tomb of Attila the Hun, who was reportedly buried with a vast fortune of gold, jewels, and plunder: a bounty that has never been found.

As they follow a trail throughout Europe, it leads them not to one tomb, but five. The Fargos also find themselves pitted against a thieving group of treasure hunters, a cunning Russian businessman, and a ruthless Hungarian who claims direct descent from Attila himself—and will stop at nothing to achieve his destiny...

Clive Cussler was the author of more than seventy books in five bestselling series, including Dirk Pitt®, NUMA Files®, Oregon Files®, Isaac Bell®, and Sam and Remi Fargo®. His life nearly paralleled that of his hero Dirk Pitt. Whether searching for lost aircraft or leading expeditions to find famous shipwrecks, he and his NUMA crew of volunteers discovered and surveyed more than seventy-five lost ships of historic significance, including the long-lost Confederate submarine Hunley, which was raised in 2000 with much publicity. Like Pitt, Cussler collected classic automobiles. His collection featured more than one hundred examples of custom coachwork. Cussler passed away in February 2020.

Thomas Perry is the highly acclaimed author of twenty novels, including the Edgar Award®–winning The Butcher’s Boy and the seven novels in the popular Jane Whitefield series, most recently Poison Flower. He has also been a writer and/or producer for several television series, including Simon & Simon, 21 Jump Street, and Star Trek: The Next Generation. He lives in Southern California.

Praise for The Tombs:

"This adventure series stands as one of the crown jewels in the Cussler empire."—Publishers Weekly


Praise for The Tombs:

"This adventure series stands as one of the crown jewels in the Cussler empire."—Publishers Weekly