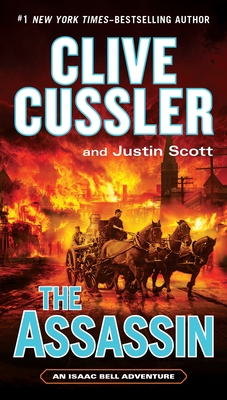 This is book number 8 in the An Isaac Bell Adventure series.

Detective Isaac Bell tracks a killer across the nation’s oilfields in this adventure in the #1 New York Times–bestselling historical series.

Bell summons his best detectives to hunt down the mysterious killer. But the murders—shootings, poisonings, staged accidents—have just begun as Bell tracks his phantom-like criminal adversary from the “oil fever” regions of Kansas and Texas to Washington, D.C., to the tycoons’ enclave of New York, to Russia’s war-torn Baku oil fields on the Caspian Sea, and back to America for a final, desperate confrontation. And this one will be the most explosive of all.

Justin Scott’s novels include The Shipkiller and Normandie Triangle; the Ben Abbott detective series; and modern sea thrillers under the pen name Paul Garrison. He is the coauthor with Cussler of seven previous Isaac Bell novels, including the latest, The Gangster. Scott lives in Connecticut.

“The Isaac Bell series continues to tell compelling stories. Tidbits of history are sprinkled throughout the narrative, and it’s fun to filter out fictional characters and events from historical facts.” —Associated Press

“Cussler and Scott have written another wonderful page-turner. This is historical action-adventure fiction at its rip-roaring best!” —Library Journal (starred review)

“As always in this series, the novel is very exciting, with excellent pacing and some very well-drawn characters. Cussler is a perennial A-lister, popularity-wise, and his Isaac Bell novels are the pick of his prodigious litter.” —Booklist