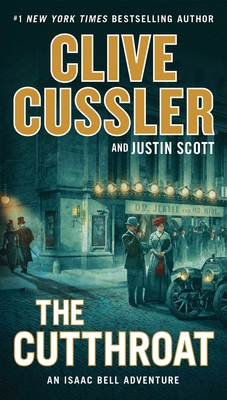 This is book number 10 in the An Isaac Bell Adventure series.

Isaac Bell may be on the hunt for the greatest monster of all time in the newest action-adventure novel from the #1 New York Times-bestselling author Clive Cussler.

The year is 1911. Chief Investigator Isaac Bell of the Van Dorn Detective Agency has had many extraordinary cases before. But none quite like this.

Hired to find a young woman named Anna Pape who ran away from home to become an actress, Bell gets a shock when her murdered body turns up instead. Vowing to bring the killer to justice, he begins a manhunt that leads him into increasingly more alarming territory. Anna was not alone in her fate--petite young blond women like Anna are being murdered in cities across America.

And the patterns go beyond the physical resemblance of the victims--there are disturbing familiarities about the killings themselves that send a chill even through a man as experienced with evil as Bell. If he is right about his fears, then he is on the trail of one of the greatest monsters of his time.

Justin Scott has written more than 30 thrillers, historicals, and mystery novels, including The Shipkiller, Normandie Triangle, and The Empty Eye of the Sea. With many books set at sea, he has been called “the Dick Francis of yachting.” His main pen name is Paul Garrison, under which he has written five modern sea thrillers, including Fire and Ice, Red Sky at Morning, Sea Hunter, The Ripple Effect, and the Paul Janson series based on a Robert Ludlum character. Scott created the Ben Abbott detective series and was twice nominated for the Edgar Allan Poe Award by the Mystery Writers of America. He collaborates with Clive Cussler on the Isaac Bell series (The Wrecker, The Spy, The Race, The Thief, The Striker, The Bootlegger, and The Assassin). He lives in Connecticut with his wife.

Praise for the Isaac Bell Novels

“Cussler and Scott have written another wonderful page-turner. This is historical action-adventure fiction at its rip-roaring best!”—Library Journal (starred review)

“As always in this series, the novel is very exciting, with excellent pacing and some very well-drawn characters. Cussler is a perennial A-lister, popularity-wise, and his Isaac Bell novels are the pick of his prodigious litter.”—Booklist

“The Isaac Bell series is a fun jaunt into America’s past and the books are a wonderful examination of life in the early twentieth century.”—Associated Press