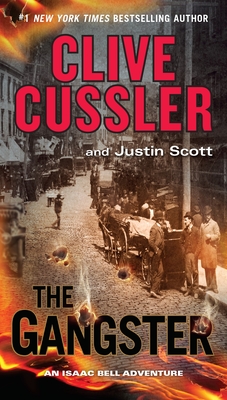 This is book number 9 in the An Isaac Bell Adventure series.

Turn-of-the-century Detective Isaac Bell takes on the upstart leader of a vicious crime organization in this novel in the #1 New York Times–bestselling series.

It is 1906, and in New York City, the Italian crime group known as the Black Hand is on a spree: kidnapping, extortion, arson. They like to take the oldest tricks and add dynamite. When a coalition of the Black Hand’s victims hire out the Van Dorn agency to protect their businesses, their reputations, and their families, Detective Isaac Bell forms a crack squad and begins scouring the city for clues. And then he spots a familiar face.

The stakes grow ever-higher, with the Black Hand becoming more ambitious, and their targets more political. If Bell can’t determine the role played by the face from his past, the next life lost could be one of the most powerful men in the nation.

Clive Cussler is the author or coauthor of over fifty previous books in five bestselling series, including Dirk Pitt®, NUMA® Files, Oregon® Files, Isaac Bell, and Sam and Remi Fargo. His nonfiction works include Built for Adventure: The Classic Automobiles of Clive Cussler and Dirk Pitt, and Built to Thrill: More Classic Automobiles from Clive Cussler and Dirk Pitt, plus The Sea Hunters and The Sea Hunters II; these describe the true adventures of the real NUMA, which, led by Cussler, searches for lost ships of historic significance. With his crew of volunteers, Cussler has discovered more than sixty ships, including the long-lost Confederate ship Hunley. He lives in Colorado and Arizona.

Justin Scott’s novels include The Shipkiller and The Man Who Loved The Normandie; the Ben Abbott detective series; and modern sea thrillers published under the pen name Paul Garrison. He is the coauthor with Cussler of seven Isaac Bell novels. Scott lives in Connecticut.

Praise for The Gangster

“As usual, the latest Bell thriller combines a vivid historical environment with a top-notch story and enjoyable, realistic characters. Bell, the detective whose nimble intellect often gets him out of tight situations, is one of Cussler’s most engaging protagonists, and the series remains fresh and exciting.” —Booklist

“Cussler has written another wonderful historical thriller. The action is fast and thoroughly enjoyable.” —Library Journal

Praise for the Isaac Bell Novels

“Cussler and Scott have written another wonderful page-turner. This is historical action-adventure fiction at its rip-roaring best!” —Library Journal (starred review)

“As always in this series, the novel is very exciting, with excellent pacing and some very well-drawn characters. Cussler is a perennial A-lister, popularity-wise, and his Isaac Bell novels are the pick of his prodigious litter.” —Booklist

“The Isaac Bell series is a fun jaunt into America’s past and the books are a wonderful examination of life in the early twentieth century.” —Associated Press