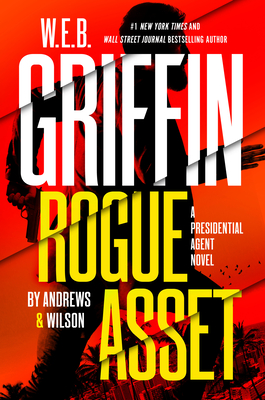 The secretary of state has been kidnapped by Islamic extremists and his only hope for survival is a reconstituted Presidential Agent team in this revival of W. E. B. Griffin's New York Times bestselling series.

Secretary of State Frank Malone has been kidnapped from his Cairo hotel—his security detail wiped out. President Natalie Cohen is left with several unacceptable options. It's time to think outside the box, and that can only mean one thing: the revival of the Presidential Agent program.

Cohen calls for Charley Castillo to come out of retirement to direct a new Presidential Agent, one Captain P. K. "Pick" McCoy, USMC. Charley may be too old to kick down doors and take names, but Killer McCoy is just the man to get the job done.

Together, they will track the kidnapped secretary from Cairo to sub-Saharan Africa. The only problem is that one man can't hope to win against an army of terrorists...good thing there are two of them.

Brian Andrews is a U.S. Navy veteran, Park Leadership Fellow, and former submarine officer with a psychology degree from Vanderbilt and a masters in business from Cornell University.

Jeffrey Wilson has worked as an actor, firefighter, paramedic, jet pilot, and diving instructor, as well as a vascular and trauma surgeon. He served in the U.S. Navy for fourteen years and made multiple deployments as a combat surgeon with an East Coast-based SEAL Team. He and his wife, Wendy, live in Southwest Florida with their four children.

“There's red-hot action from the get-go in the ninth novel in the late W.E.B. Griffin's newly revived Presidential Agent series. . . A kick-ass thriller from start to finish.”
—Kirkus Reviews

“Fans of bestseller W.E.B. Griffin [will] welcome the return of Griffin's hero C.G. “Charley” Castillo [in] the capable ninth Presidential Agent novel. . . Andrews and Wilson supply plenty of credible action in the Griffin mold, while the mentoring subplot provides extra interest. Readers will look forward to how the succession angle is handled in the sequel.”
—Publishers Weekly