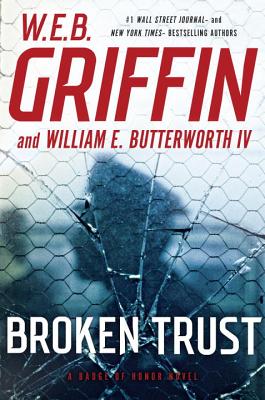 This is book number 13 in the Badge Of Honor series.

Having investigated his share of gruesome murders, Philadelphia Homicide Sergeant Matt Payne is beginning to think nothing can shock him – until the case of a young socialite’s death lands on his desk. The Camilla Rose Morgan he’d known as a teenager was beautiful and brilliant – how was it possible she’d jumped to her death from her own balcony? Her brother tells Payne she’d tragically been battling a lifetime of mental demons, and there is plenty of evidence of it, but still…something just doesn’t sit right. The more Payne digs, the more complications he discovers. Reputations are on the line here, and lives – and if Payne doesn’t tread carefully, one of them may be his own.

W.E.B. Griffin is the author of seven bestselling series: The Corps, Brotherhood of War, Badge of Honor, Men at War, Honor Bound, Presidential Agent, and Clandestine Operations. He lives in Fairhope, Alabama, and Buenos Aires, Argentina.

William E. Butterworth IV has been a writer and editor for major newspapers and magazines for over twenty-five years, and has worked closely with his father for several years on the editing of the Griffin books. He is the co-author of several novels in the Badge of Honor, Men at War, Honor Bound, Presidential Agent, and Clandestine Operations series. He lives in St.Petersburg, Florida.

“Another sharp examination of crime and police work in Philadelphia. . . Combine[s] great local color with cases that illustrate the special challenges faced by cops in volatile urban areas [and] shows us the politics of law enforcement in major cities, where perception can be more important than crime statistics. . . Griffin and Butterworth keep us turning pages without resorting to excessive melodrama. Straightforward urban realism mixed with characters we care about have kept their formula fresh.”—Connecticut Post

“[Broken Trust] has many relevant themes intertwined with an action packed plot. . . The novel offers a lot of insight into the lives and challenges of the police." —Blackfive.net

“A very gripping, very well-researched look at a couple of days in Philly . . . Griffin and Butterworth have a real feel for rough neighborhoods that tourists never see.” —Connecticut News

“Gripping . . . Payne and his cohorts face long odds in a gritty police series that provides sociological comment but no easy answers.” —Publishers Weekly

Praise for Griffin and Butterworth

“Griffin has the knack. With enviable skill he doles out humanizing detail for a large and colorful cast, and you care what happens to virtually all of them. Griffin is one of those writers who sets his novel before you in short, fierce, stop-for-nothing scenes. Before you know it, you’ve gobbled it up.” —The Philadelphia Inquirer

“If God is truly in the details, then Griffin must be the pope of police procedurals. What’s amazing is that all these factoids don’t slow down the story’s considerable momentum for a minute. Nor do they keep Griffin’s gritty cops from convincing us of their individuality.” —Publishers Weekly

“Fans of Ed McBain’s 87th Precinct novels better make room on their shelves. . . . Badge of Honor is first and foremost the story of the people who solve the crimes. The characters come alive.” —TheGainesville Times