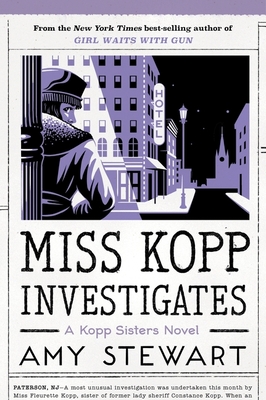 This is book number 7 in the A Kopp Sisters Novel series.

Life after the war takes an unexpected turn for the Kopp sisters, but soon enough, they are putting their unique detective skills to use in new and daring ways.

Winter 1919: Norma is summoned home from France, Constance is called back from Washington, and Fleurette puts her own plans on hold as the sisters rally around their recently widowed sister-in-law and her children. How are four women going to support themselves?

A chance encounter offers Fleurette a solution: clandestine legal work for a former colleague of Constance’s. She becomes a “professional co-respondent,” posing as the “other woman” in divorce cases so that photographs can be entered as evidence to procure a divorce. While her late-night assignments are both exciting and lucrative, they put her on a collision course with her own family, who would never approve of such disreputable work. One client’s suspicious behavior leads Fleurette to uncover a much larger crime, putting her in the unlikely position of amateur detective.

In Miss Kopp Investigates, Amy Stewart once again brilliantly captures the women of this era—their ambitions for the future as well as the ties that bind—at the start of a promising new decade.

Praise for the Kopp Sisters Novels     “Any novel that features the Kopp sisters is going to be a riotous, unforgettable adventure.” —Bustle   “An unforgettable, not-to-be-messed-with heroine . . . The rest is kickass history.” —Marie Claire   “Excels in revisiting a vanished time, place, and sensibility.” —Washington Post     “Amy Stewart uses her skills as a researcher to lovingly excavate the wonderful, entirely forgotten story of the Kopp sisters.” —USA Today     “A fine, historically astute novel . . . The sisters’ personalities flower under Stewart’s pen.” —New York Times Book Review     “Zippy, winsome . . . [A] cinematic story of the [Kopps], the siege instigated by their powerful enemy, and their brave efforts in the face of real violence.” —Los Angeles Times     “Stewart gives us three sisters whose bond—scratchy and well-worn but stronger for it—is unspoken but effortless.” —NPR     “Fans of strong female characters will find their new favorite heroine in Constance Kopp.” —Cosmopolitan     “A smart, romping adventure, featuring some of the most memorable and powerful female characters I’ve seen in print for a long time. I loved every page as I followed the Kopp sisters through a too-good-to-be-true (but mostly true!) tale of violence, courage, stubbornness, and resourcefulness.” —Elizabeth Gilbert    —