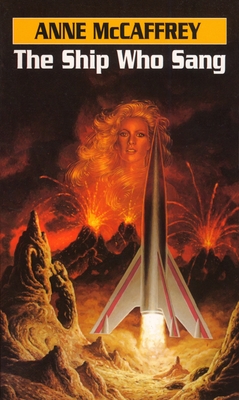 This is book number 1 in the Brainship series.

Helva had been born human, but only her brain had been saved—saved to be schooled, programmed, and implanted into the sleek titanium body of an intergalactic scout ship. But first she had to choose a human partner—male or female—to share her exhilirating excapades in space!

Her life was to be rich and rewarding . . . resplendent with daring adventures and endless excitement, beyond the wildest dreams of mere mortals.

Gifted with the voice of an angel and being virtually indestructable, Helva XH-834 antipitated a sublime immortality.

Then one day she fell in love!

Anne McCaffrey, one of the world’s most popular authors, is best known for her Dragonriders of Pern® series. She was the first woman to win the two top prizes for science fiction writing, the Hugo and Nebula awards. She was also given the American Library Association’s Margaret A. Edwards Award for Lifetime Literary Achievement in Young Adult Fiction, was inducted into the Science Fiction Hall of Fame, and was named a Science Fiction Writers of America Grand Master. Born in Cambridge, Massachusetts, in 1926, McCaffrey relocated to Ireland in the 1970s, where she lived in a house of her own design, named Dragonhold-Underhill. She died in 2011.