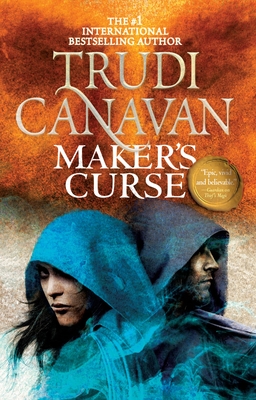 Together, Rielle and Tyen face a dazzling world of political intrigue, treacherous villains, and unforgettable magic in this powerful and thrilling final novel of the Millennium's Rule series.

Rielle is now the Maker, restorer of worlds. She has lost count of the number of worlds she has been sent to save. Tyen has cast off his old identity. No longer a spy, he now attempts to teach new sorcerers and find ways to counteract the war-machines that are spreading throughout the worlds.

But when an old enemy brings news of something worse than magically dead worlds and dangerous sorcerers—a threat unlike anything the worlds have faced before—Rielle and Tyen must reunite if they are to have any chance of saving humanity.

Trudi Canavan published her first story in 1999 and it received an Aurealis Award for Best Fantasy Short Story. Her debut series, The Black Magician Trilogy, made her an international success and her last five novels have been Sunday Times bestsellers in the UK. Trudi Canavan lives with her partner in Melbourne, Australia, and spends her time writing, painting and weaving.

"A suspenseful masterpiece....This page-turner has twists in nearly every chapter, leaving readers on the edge of their seats. The shocking ending will have fans desperate for the sequel."—RT Book Reviews on Angel of Storms

"Delightful... a vivid and enjoyable experience."—SFX Magazine on Thief's Magic

"The darling of the fantasy fiction scene returns with a magical new trilogy to delight loyal readers and newcomers alike ... Canavan cleverly keeps you guessing ... definitely an inviting introduction to the series."—SciFi Now on Thief's Magic

"Will hook readers immediately and they won't be able to put this thrill-ride of a book down."—RT Book Reviews on Thief's Magic