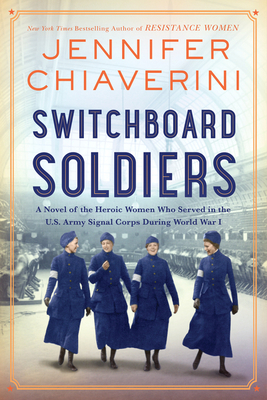 From New York Times bestselling author Jennifer Chiaverini, a bold, revelatory novel about one of the great untold stories of World War I—the women of the U.S. Army Signal Corps, who broke down gender barriers in the military and battled a pandemic as they helped lead the Allies to victory.

“An eye-opening and detailed novel about remarkable female soldiers. . . Chiaverini weaves the intersecting threads of these brave women’s lives together, highlighting their deep sense of pride and duty.”—Kirkus Reviews

In June 1917, General John Pershing arrived in France to establish American forces in Europe. He immediately found himself unable to communicate with troops in the field. Pershing needed telephone operators who could swiftly and accurately connect multiple calls, speak fluent French and English, remain steady under fire, and be utterly discreet, since the calls often conveyed classified information.

At the time, nearly all well-trained American telephone operators were women—but women were not permitted to enlist, or even to vote in most states. Nevertheless, the U.S. Army Signal Corps promptly began recruiting them.

More than 7,600 women responded, including Grace Banker of New Jersey, a switchboard instructor with AT&T and an alumna of Barnard College; Marie Miossec, a Frenchwoman and aspiring opera singer; and Valerie DeSmedt, a twenty-year-old Pacific Telephone operator from Los Angeles, determined to strike a blow for her native Belgium.

They were among the first women sworn into the U.S. Army under the Articles of War. The male soldiers they had replaced had needed one minute to connect each call. The switchboard soldiers could do it in ten seconds.

Deployed throughout France, including near the front lines, the operators endured hardships and risked death or injury from gunfire, bombardments, and the Spanish Flu. Not all of them would survive.

The women of the U.S. Army Signal Corps served with honor and played an essential role in achieving the Allied victory. Their story has never been the focus of a novel…until now.

Jennifer Chiaverini is the New York Times bestselling author of several acclaimed historical novels, including Mrs. Lincoln’s Sisters and Resistance Women, as well as the beloved Elm Creek Quilts series. A graduate of the University of Notre Dame and the University of Chicago, she lives with her husband and two sons in Madison, Wisconsin.

“An eye-opening and detailed novel about remarkable female soldiers. . . Chiaverini weaves the intersecting threads of these brave women’s lives together, highlighting their deep sense of pride and duty.” — Kirkus Reviews on Switchboard Soldiers

“Enchanting…Chiaverini brings her singular characters to life, including real historical figures, as they become united in the quest to serve their country. Fans of historical fiction will be captivated.” — Publishers Weekly on Switchboard Soldiers

“So much new information is packed into this story that it becomes the best kind of history lesson…Chiaverini makes it easy to identify with and care about these women… The dangers of war are neatly integrated into daily lives and geographic location, and Chiaverini also addresses gender and race inequities and the insidious dangers of the spread of influenza on overseas troop transport.” — Library Journal (starred review) on Switchboard Soldiers

“Chiaverini never loses her focus on her four extraordinarily courageous, resourceful, yet relatable narrators. Chiaverini’s many fans and every historical fiction reader who enjoys strong female characters, will find much to love in this revealing WWII novel.” — Booklist on Resistance Women

“Chiaverini offers an intimate and historically sound exploration of the years leading up to and through WWII . . . exceptionally insightful, making for a sweeping and memorable WWII novel.” — Publishers Weekly on Resistance Women

"On March 3, 1913, a day before President Wilson’s inauguration, suffragists marched down Pennsylvania Avenue in Washington, DC, to advocate for a constitutional amendment. In her latest women-focused historical novel, Chiaverini offers an impassioned account that pulls readers in, making the details feel freshly alive. This politically aware novel about a historic quest for democratic justice compels readers to contemplate everything that has and hasn’t changed regarding voting rights and gender and racial equality." — Booklist on The Women’s March

“Undeniably valuable and timely, informative and insightful. Chiaverini's latest work of historical fiction weaves together the actions of three real women, advocating for social and legal change while also speaking to the tensions regarding race, class, and rhetorical arguments that prevent these groups from working together smoothly (if at all)." — Kirkus Reviews on The Women’s March