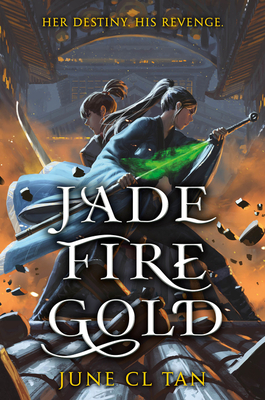 Ahn is no one, with no past and no family.

Altan is a lost heir, his future stolen away as a child.

When they meet, Altan sees in Ahn a path to reclaiming the throne. Ahn sees a way to finally unlock her past and understand her lethal magical abilities.

But they may have to pay a far deadlier price than either could have imagined.

A stunning homage to the Xianxia novel with dangerous magic, fast-paced action, and a delightful  romance, Jade Fire Gold isn’t one to miss!

“An addictive story that is impossible to put down."   —Swati Teerdhala, author of The Tiger at Midnight series

"Adventure at its finest. A beautifully rendered story that honors the great wuxia epics.” —Joan He, author of Descendant of the Crane and The Ones We're Meant to Find

“An epic adventure!” —Elizabeth Lim, New York Times bestselling author of Spin the Dawn and So This Is Love

“Epic in every sense of the word, beautiful as it is sweeping." —Roseanne A. Brown, New York Times bestselling author of A Song of Wraiths and Ruin

June CL Tan writes science fiction and fantasy inspired by her childhood in multicultural Singapore, where she was raised on a diet of classic books and wuxia movies, caffeine, and congee. When she is not writing, she can be found wandering the streets of New York City in search of everyday mysteries and miracles. Jade Fire Gold is her first novel, and you can find her at www.junecltan.com.

"A rich fantasy world and complex, intricately drawn characters makes JADE FIRE GOLD an addictive story that is impossible to put down. June CL Tan is a stunning new debut and one to watch."  — Swati Teerdhala, Author of The Tiger At Midnight series

"From sweeping deserts to thrashing seas, JADE FIRE GOLD is adventure at its finest. Yet in between its pages you’ll also find a tender spirit and beautifully rendered story that honors the great wuxia epics. Jin Yong would be proud." — Joan He, New York Times bestselling author of Descendant of the Crane and The Ones We're Meant to Find.

"An epic adventure! Ahn and Altan steal off the pages with their delicious banter, and into readers' hearts with their resilience and courage." — Elizabeth Lim, NYTimes bestselling author of SPIN THE DAWN and SO THIS IS LOVE

"Epic in every sense of the word, Jade Fire Gold is a fantasy as beautiful as it is sweeping. June CL Tan's world sings with magic on each page, populated with characters readers will cheer and cry for in equal measure."  — Roseanne A. Brown, New York Times Bestselling Author of A Song of Wraiths and Ruin

"Brutal and beautiful, June Tan's debut is a force. JADE FIRE GOLD was a gripping adventure I couldn't put down.”  — Hafsah Faizal, New York Times bestselling author of We Hunt the Flame

“ [A] smoldering romance takes place against the backdrop of themes of duality and complementarity in nature, trauma and revenge, self-sacrifice, truth in history, and the fight for a better future… A magic-filled debut that will leave readers eager for more from this author.” — Kirkus Reviews (starred review)

"[A] thrilling debut. Effective worldbuilding and vivid imagery suck the reader in to Tan’s high-fantasy, Chinese folklore–inspired world. A strong cast of supporting characters rounds out a book rooted in themes of power and imperialism." — Publishers Weekly (starred review)

Addictive and immersive, June C.L. Tan's JJade Fire Gold transported me straight to the desert and kept me there right up until the final page. A spectacular debut full of adventure, magic and heart—I can't wait to see what comes next from this talented new voice in YA fantasy! — Lynette Noni, #1 bestselling author of The Prison Healer

“A complex and intriguing world based on Chinese mythology… [for] those who love larger-than-life stakes.” — Bulletin of the Center for Children’s Books