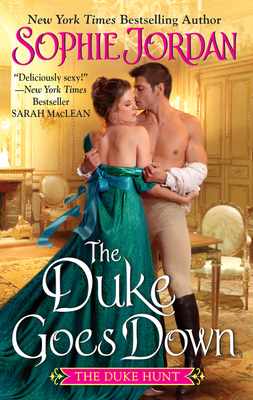 New York Times bestselling author Sophie Jordan begins the all new The Duke Hunt series with the illegitimate son of a duke who meets his match in the daring daughter of a vicar.

Peregrine Butler’s privileged blue-blooded world is rocked to the core when it is revealed he was born before his parents’ marriage and therefore is not the legal heir to the dukedom. Facing ruin, Perry must use his charm and good looks to win an heiress—all the while ignoring his fascination with the one interfering and alluring chit who is intent on sabotaging his efforts.

Everyone knows Imogen Bates, the virtuous daughter of the senile vicar. She can write a sermon in a day and spot a rogue in a second, so she sees right through Perry’s seductive façade. But Imogen’s plan to protect the heiresses of her beloved Shropshire from the erstwhile Duke of Penning, the bane of her existence since childhood, soon turns into something altogether unacceptable for the proper lady … who suddenly finds herself longing to keep his heated glances and tempting kisses all to herself.

Sophie Jordan grew up in the Texas hill country where she wove fantasies of dragons, warriors, and princesses. A former high school English teacher, she’s the New York Times, USA Today, and international bestselling author of more than thirty novels. She now lives in Houston with her family. When she’s not writing, she spends her time overloading on caffeine (lattes preferred), talking plotlines with anyone who will listen (including her kids), and cramming her DVR with anything that has a happily ever after.

"Jordan…makes a firm argument for more historical romances that dare to live outside the ballroom or even the aristocracy altogether. Her love scenes crackle (don't worry, the book makes good on its deliciously clever title) … for those looking for a historical romp that goes a bit further afield than a 19th century estate, The Duke Goes Down is a delightful diversion.”
— Entertainment Weekly

“It is a truth universally acknowledged that the young lady everyone assumes is mousy has uncharted depths...particularly when there’s a scientific sister, an aphrodisiac, and the stepbrother of a duke around. Creative, unique, and racy—this story is not unlike the very elixir around which it is based.”  — Jodi Picoult, New York Times bestselling author, on The Virgin and the Rogue

“The sixth in the Rogue Files series is a lusty reversal of the rake-and-the-wallflower trope. A refreshing dose of fun—and the best in the series.” — Kirkus Reviews (starred review) on The Virgin and the Rogue

“A steamy romance full of surprises.”  — Fresh Fiction on The Virgin and the Rogue

“A surfeit of humor, a zippy pace, and a cast of well-defined and intriguing protagonists make this a delicious late-summer read.” — Library Journal