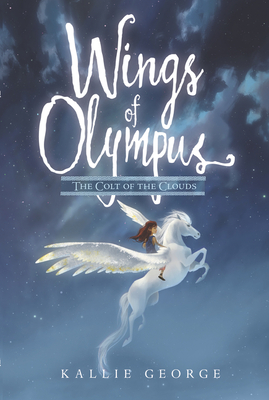 By Kallie George, Celia Krampien (Illustrator)
$7.99
In Stock at Our Warehouse - Usually Ships in 1-5 Days

This is book number 2 in the Wings of Olympus series.

Soar into adventure with Pippa, an orphaned girl in Ancient Greece, and her beloved winged horse, Zephyr, who head out on a daring adventure to save Mt. Olympus in the second book in the Wings of Olympus series by beloved, award-winning author Kallie George.

Ever since Pippa lost the winged horse race of the ancient gods and was banned from the slopes of Mount Olympus, she and her beloved horse, Zephyr, have tried to adjust to living a normal life on the ground. But when Pippa rescues a lost winged colt, she knows she must return him to the land of the gods and goddesses—even though she was warned never to return.

Up on Mount Olympus, however, disaster awaits. The gods and goddesses are at war, and someone has kidnapped all of the horses. If Pippa doesn’t find a way to restore peace, the battle will destroy the human world and the winged horses could be lost—forever.

With the help of her new friend Hero, the not-so-heroic descendant of Hercules, and her stubborn colt, Tazo, Pippa takes on a task few mortals would dare: to rescue the horses and end the war.

This heartfelt adventure series from acclaimed author Kallie George is perfect for horse lovers and fans of Greek myths alike!

Kallie George is an author, editor, and creative writing teacher. She has written numerous books for children, including the Magical Animal Adoption Agency series, the Heartwood Hotel series, Wings of Olympus, Duck, Duck, Dinosaur, and The Lost Gift. Kallie lives in BC, on the Sunshine Coast, with her husband and son. Visit Kallie online at www.kalliegeorge.com.

“The winning premise should draw readers who are into horses and Greek mythology… Pippa’s choices should prompt readers to ponder how love, fate, and trust determine our actions. A fun series starter.”
— Booklist