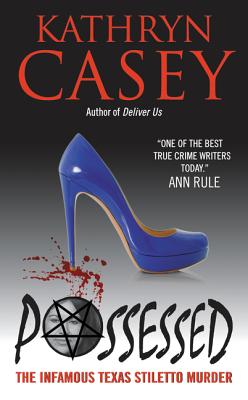 The officer responding to a 911 call at one of Houston’s hippest high-rises expected the worst. After all, domestic violence situations can be unpredictable. But nothing could’ve prepared him for what he found: a beautiful woman drenched in blood . . . an older man lying dead on the floor . . . and a cobalt blue suede stiletto with tufts of white hair stuck to its five-and-a-half-inch heel.

With her stunning looks, magnetic personality, and erratic behavior, Ana Trujillo had a notorious reputation on the downtown Houston scene. She spoke often of occult powers, though few knew how deeply she believed such boasts. Stefan Andersson was a gentle soul, a Swedish transplant with a good career and trusted friends, who was desperate to find someone special. Theirs is a story of obsession, madness, and tragedy. Because once Stefan fell head over heels for Ana, he was under her control—and he didn’t have a chance in hell.

Kathryn Casey is an award-winning journalist, who has written for Rolling Stone, TV Guide, Reader's Digest, Texas Monthly, and many other publications. She's the author of seven previous true crime books and the creator of the highly acclaimed Sarah Armstrong mystery series. Casey has appeared on Oprah, Oprah Winfrey's Oxygen network, Biography, Nancy Grace, E! network, truTV, Investigation Discovery, the Travel Channel, and A&E. She lives in Houston with her husband and their dog, Nelson.