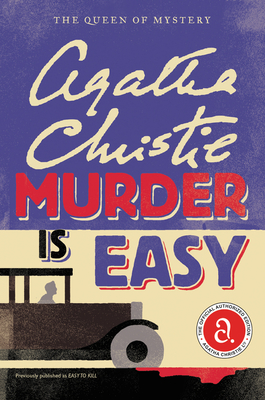 I love "Whodunit" mysteries, and who is the best at that? Agatha Christie!

I listened to the audio on Libro.fm while taking my morning walks. Time flew by while listening. The best Whodunits keep you guessing until the end. I was not disappointed. It's always the least expected person, which you try to guess at but are never completely sure of.

If you want to take your mind off the issues of the day, read or listen to Murder is Easy. Enjoy!

A quiet English village is plagued by a fiendish serial killer in Queen of Mystery Agatha Christie’s classic thriller, Murder is Easy.

Luke Fitzwilliam does not believe Miss Pinkerton’s wild allegation that a multiple murderer is at work in the quiet English village of Wychwood and that her local doctor is next in line.

But within hours, Miss Pinkerton has been killed in a hit-and-run car accident. Mere coincidence? Luke is inclined to think so—until he reads in the Times of the unexpected demise of Wychwood’s Dr. Humbleby.…

Agatha Christie is the most widely published author of all time, outsold only by the Bible and Shakespeare. Her books have sold more than a billion copies in English and another billion in a hundred foreign languages. She died in 1976, after a prolific career spanning six decades.

“I had read all of Agatha Christie by the time I was ten.” — Colm Tóibín, New York Times bestselling author of Brooklyn

“One of Agatha Christie’s best mystery novels, a story fascinating in its plot, clever and lively in its characters and brilliant in its technique.” — New York Times

“Suspense, mystery, romance and an agreeable touch of the macabre.” — The Guardian