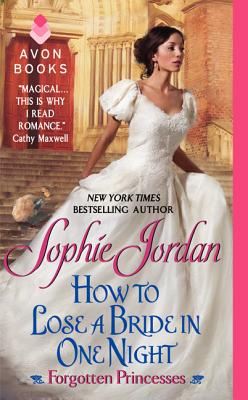 This is book number 3 in the Forgotten Princesses series.

He saved her life…

When Annalise Hadley is tossed over the side of her honeymoon barge, the newly minted duchess knows she’s been left for dead—for her husband’s only interest is in her vast dowry, not her muddied lineage. However, she didn’t count on a savior. Especially not an honorable, sinfully intriguing earl who will tempt her to risk everything—again.

Now he will seduce her heart and soul.

A man with his own demons, Owen Crawford, the reclusive Earl of McDowell, is enchanted by the mysterious, courageous woman he rescued. He will help her heal, teach her to protect herself, and then send her away—so that she’ll never see he’s far from the hero she believes him to be.

But days and nights alone prove that some secrets are meant to be discovered…some desires are too powerful to resist…and some wounds can be healed only by love.

“Sophie Jordan is one of a kind!”
— Samantha James

“Jordan’s latest novel has all the ingredients of a classic romance: a strong heroine with a sharp sense of wit, a sexy hero, and an entertaining, fanciful plot”
— Chicago Tribune

“...trademark Jordan: dramatic, fast-paced and sparkling with wit and passion.”
— Romantic Times BOOKclub praise for LESSONS FROM A SCANDALOUS BRIDE