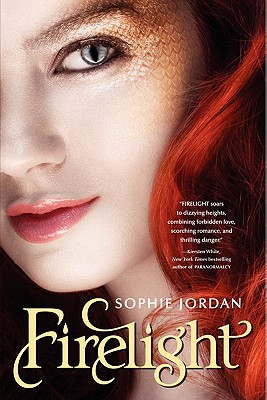 This is book number 1 in the Firelight series.

With her rare ability to breathe fire, Jacinda is special even among the draki—the descendants of dragons who can shift between human and dragon forms.

But when Jacinda’s rebelliousness forces her family to flee into the human world, she struggles to adapt, even as her draki spirit fades. The one thing that revives it is the gorgeous, elusive Will, whose family hunts her kind. Jacinda can’t resist getting closer to him, even though she knows she’s risking not only her life but the draki’s most closely guarded secret.

Mythical powers and breathtaking romance ignite in this story of a girl who defies all expectations and whose love crosses an ancient divide, from New York Times bestselling author Sophie Jordan.

Sophie Jordan grew up in the Texas hill country where she wove fantasies of dragons, warriors, and princesses. A former high school English teacher, she’s the New York Times, USA Today, and international bestselling author of more than thirty novels. She now lives in Houston with her family. When she’s not writing, she spends her time overloading on caffeine (lattes preferred), talking plotlines with anyone who will listen (including her kids), and cramming her DVR with anything that has a happily ever after.

“Jordan executes a refreshing and exciting tale of forbidden supernatural love and desire. Jacinda is strong and spunky, just like her story. Readers won’t be able to put down this remarkable YA debut. An ethereal series start, Firelight should not be missed.” — Romantic Times Starred Review

“Jacinda and Will’s intensely sexy scenes together will leave romance readers fired up for the planned sequel.” — Bulletin of the Center for Children’s Books