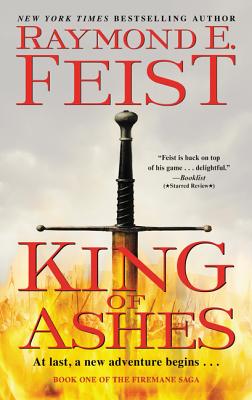 This is book number 1 in the Firemane Saga, The series.

For centuries, the five greatest kingdoms of North and South Tembria, twin continents on the world of Garn, have coexisted in peace. But the balance of power is destroyed when four of the kingdoms violate an ancient covenant and betray the fifth: Ithrace, the Kingdom of Flames, ruled by Steveren Langene, known as "the Firemane" for his brilliant red hair. As war engulfs the world, Ithrace is destroyed and the Greater Realms of Tembria are thrust into a dangerous struggle for supremacy.

As a Free Lord, Baron Daylon Dumarch owes allegiance to no king. When an abandoned infant is found hidden in Daylon’s pavilion, he realizes that the child must be the missing heir of the slain Steveren. The boy is valuable—and vulnerable. A cunning and patient man, Daylon decides to keep the baby’s existence secret, and sends him to be raised on the Island of Coaltachin, home of the so-called Kingdom of Night, where the powerful and lethal Nocusara, the "Hidden Warriors," legendary assassins and spies, are trained.

Years later, another orphan of mysterious provenance, a young man named Declan, earns his Masters rank as a weapons smith. Blessed with intelligence and skill, he unlocks the secret to forging King’s Steel, the apex of a weapon maker’s trade known by very few. Yet this precious knowledge is also deadly, and Declan is forced to leave his home to safeguard his life. Landing in Lord Daylon’s provinces, he hopes to start anew.

Soon, the two young men—an unknowing rightful heir to a throne and a brilliantly talented young swordsmith—will discover that their fates, and that of Garn, are entwined. The legendary, long-ago War of Betrayal has never truly ended . . . and they must discover the secret of who truly threatens their world.

Raymond E. Feist is the author of more than thirty previous books, including the internationally bestselling “Riftwar Cycle” of novels set in his signature world of Midkemia, as well as a standalone novel, Faerie Tale. The Firemane Saga is his first all-new epic fantasy series. He lives in San Diego, California.

“Feist (Magician’s End, 2013) is back on top of his game in this series. . . .A delightful fantasy novel, full of simple magic, fighting, political intrigue, and religious strife.” — Booklist (starred review)

“Feist succeeds in finding warmth and meaning in the smaller moments . . . [and] shines when he focuses on the human element, which feels more necessary than ever.” — RT Book Reviews

Praise for A Crown Imperiled: “Feist constantly amazes with his ability to create great casts of characters.” — SF Site

“Fast action, appealing characters, and a splendid setting will delight readers of fantasy and leave them eager for the next battle.” — Kirkus Reviews

“The riveting conclusion to the Chaoswar Saga and the Riftwar Cycle is satisfying in every way...In Magician’s End, [Feist] has masterfully brought the entire epic in a full circle.” — Booklist (starred review) on MAGICIAN'S END

“With his storytelling mastery and ear for colorful language and nuance, the author of numerous books set in the dual worlds of Midkemia and Kelewan here launches a series that takes his fantasy universe into a whole new phase. ” — Library Journal on A CROWN IMPERILED

“Feist has a command of language and a natural talent for keeping the reader turning pages.” — Chicago Sun-Times on A KINGDOM BESIEGED